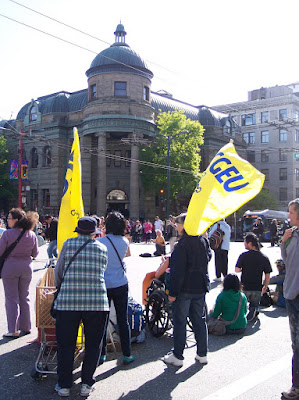 At rush hour on Monday, traffic was stopped at Main & Hastings by people protesting the closure of the nearby Health Contact Centre. There was another planned for Tuesday afternoon outside the Downtown Eastside Women's Centre. Protesters were chanting, "Save the Contact Centre, the Contact Centre Saves Lives."
Those povertarian jobs are union which is why the BCGEU yellow flags were there.
I was only at the Health Contact Centre a couple of times, when it first opened. I remember they had a gigantic board on the wall listing the programs they offered. One was knitting classes. I remember they also had free peppermint tea, that you could help yourself to.
I went there because a friend and his pals used to sit in there in the evening and use their laptops and he asked me to help him fix his laptop. So we went in there and sat in an empty room, one that musicians usually used. We were in there no more than 5 minutes and a woman who worked there came by and yelled at us to get out of that room. She was a real bull, just another abusive povertarian with zero communication skills.
There may have been some good going on in the Health Contact Centre; I didn't see it. I knew a guy who seemed to enjoy playing music in there at night after he left Carnegie.
There was definitely a nanny state function to the place. I saw that when I talked to an acquaintance who lived in a room on the Downtown Eastside with his wife. He used to be a fisherman and lived up Vancouver Island in a town that he said "went ghost". He and his wife started doing crack and had their last kid taken away, a kid they had named "Chance", as they considered him their last chance. They were hustlers and quite high functioning when it came to earning extra cash to top up their welfare. Anyway, he told me that his wife had told him to drop by the Health Contact Centre and get some sanitary napkins 'cause they were giving them out free, and why buy them if you can score them for free. So he went over there and came back with eight. Eight from the nanny state.
Now people have to walk all the way over to Oppenheimer Park to load up on free sanitary napkins. I guess that's what Coastal Health meant when they said services were being duplicated.
I got the impression the Contact Centre had shrunk when I looked in the door more recently, but I didn't pay much attention. I did notice Mark Townsend, who along with his wife is co-director of the Portland Hotel Society [PHS] which runs the Downtown Eastside poverty industry like a company town, quoted in the newspaper as saying that the Contact Centre was the size of a "postage stamp". He said it was too small to be a longterm drop-in centre, so he supported the closure. What he didn't mention was that the funding for the Contact Centre is being transferred to the LifeSkills Centre. Guess who runs the LifeSkills centre? Mark Townsend and the PHS.
Posted by reliable sources at 4:50 PM 6 comments: Links to this post