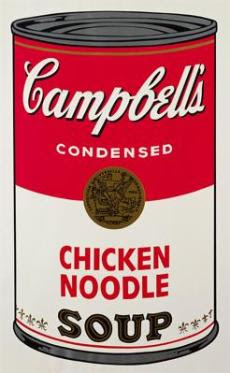 I've had that wicked flu. After vomiting three times the first day and having diarrhea for six days and six nights -- and periods in between when I felt like I was getting better -- I ventured out into the rain storm on Thursday and got to a doctor.

Guess what the doctor ordered? Chicken noodle soup. I told her that I had actually been eating Campbell's Chicken Noodle soup. She said, "Great", "Perfect." I'd had a craving for it and asked my neighbor to pick some up for me. I specified Campbell's because I had tried an even cheaper brander once and it tasted cheaper. "Chicken noodle soup is an easy food to digest," the doctor told me.

Generally, I try not to eat too much canned soup because the salt level in it is not healthy. But it's the salt that makes it good for you when you have diarrhea. "You want salty", the doctor said.

Don't eat vegetables, fruits, or fruit juice, the doctor told me, except apple juice. That made me perk up as I had been craving apple juice on the first day I was sick. My neighbor said he'd pick me up some and I was disappointed when he got orange by mistake. So he went back and got Sunripe Apple which I sipped on for hours. It was nice.

The doctor prescribed me Ipprobrium (sp?) too. And when my tests come back next week, she may prescribe antibiotics, depending on what she discovers.

So along with guzzling large bottles of water, I have been living on apple juice and chicken noodle soup. By the time I'm well again, I may have enough cans to build one of those stacks like Andy Warhol.
Posted by reliable sources at 8:52 PM 1 comment: