Is this your son? I Told You to Come and Get Him. 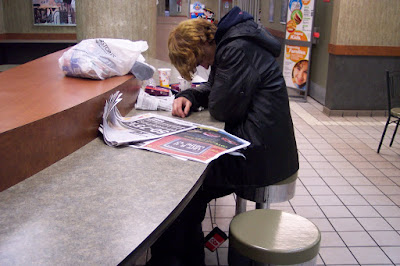 He came back. Late Christmas night, turkey-stuffed Downtown Eastsiders meeting for hot chocolate at McDonalds at Terminal & Main St. spotted him. I had written about him previously in a Nov. 1 post, "Is this your son? Come and Get Him", when he dropped a needle on the floor in McDonalds.

When this addict-customer left on Christmas night, he dropped a five dollar bill which another male customer later picked up, saying, "There is a Santa Claus afterall."

Then the addict-customer returned to McDonalds a few minutes later on Christmas night and stood by the ketchup dispenser rummaging through his pockets. He asked the staff if they had found two CDs, but they hadn't.

Maybe that was his Christmas present.

Posted by reliable sources at 5:11 PM No comments: Links to this post

Your Tax Dollars at Rest

Unmarked police car parked across from the Vancouver Police station on Main St. near Hastings. 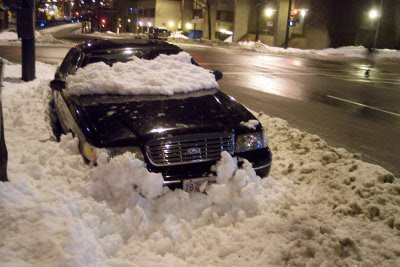 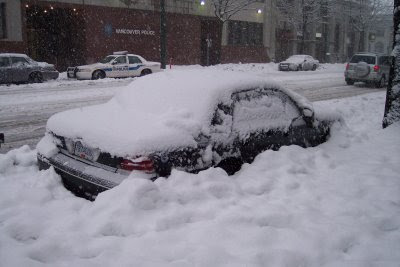 Boxing Day as it snowed. 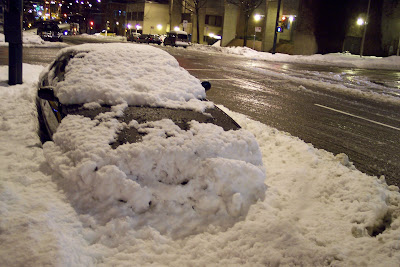 Boxing Day night as it rained.

Posted by reliable sources at 3:22 PM No comments: Links to this post

The economic crisis may be making it difficult to sell cars not only in the U.S., but in Canada as well. I was told that this Chrysler Dodge Jeep car lot beside McDonalds on Main St. near Terminal Ave. is closing. 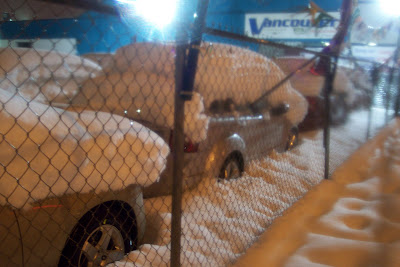 This photo of the Chrysler car lot on Main St. was taken on a night just after Christmas 2008, during rainfall that followed snow fall.
Posted by reliable sources at 3:20 PM No comments: Links to this post 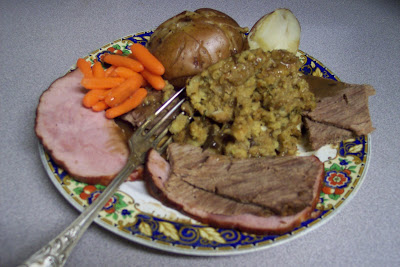 I just received this photo of a meal which Denis, the French-Canadian caretaker at Somerville Place social housing near Oppenheimer Park, made for anybody in the building on Christmas. It was his Christmas gift.

Denis apparently went to Superstore on the Saturday before Christmas, and was stuck there for two hours because there were 6 cashiers for roughly 200 customers.

Being from Ottawa, Denis was really on top of the heavy snowfall. He got the sidewalk in front of Sommerville Place cleared quickly, residents report. He used salt. When you looked at his sidewalk, you'd think it was summertime, a neighbor said. Compare Denis to staff at the Police station a few blocks away who were much slower to get on top of the snow.

Posted by reliable sources at 3:10 PM No comments: Links to this post