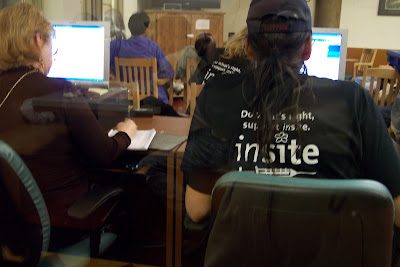 There have long been stories from people barred from Carnegie Centre that when they didn’t grovel during their appeal process, they were instantly told that their barring had been extended. Exhibiting confidence or knowledge of one’s rights is considered insubordination in this "residential school" environment, an observation made by William Simpson who was barred from the building after getting elected to the Board. Finally, there is taped evidence that Carnegie Security boss Skip Everall and security guard Ted Chaing are engaging in such human rights abuses.

The tape capturing Everall and Chaing abusing power was made on June 22, 2008 while a woman was meeting with them to appeal her barring from the Carnegie Seniors Lounge. She had been barred for raising her voice at a notoriously abusive coffee seller, Devor, who was yelling at her. The woman believed she had a right to know the name of the Security boss who had barred her. She did not at the time know Skip Everall's surname and she couldn't be sure that "Skip" wasn't a nickname. When she asked him twice for his name, her barring from the Seniors Lounge in the Carnegie basement was extended to the entire Carnegie building.

Woman: (speaking to Everall in a soft tone, almost a whisper) What is your real name by the way? You’ve made a decision about me and you’re not telling me your name. I’m asking you your name Skip. [She remained polite.]

Chaing: We call him by Skip.

Woman to Everall: What is your name, your last name?

Woman: You barred me….

Woman: But if I want to appeal it to the City I have to know your name….

Skip: I’m sorry, you’re going to be barred from the building. [speaking forcefully] The meeting’s over!

Woman: I’m going to be barred from the building because I asked you your name?

Skip: We’ll just discuss the matter some other time.

Woman: Am I barred from the building now?


When Everall responded to the woman asking him his name by barring her from the entire building, Chaing added that she was also being barred for raising the issue of sexism. Chaing was referring to her earlier statements that she believed Security had been sexist not only in barring her from the Seniors Lounge for talking back to a man, but for assuming that only the man’s version of events needed to be obtained before a decision was made to bar her from the Seniors Lounge. She claims Everall saw her twice after the incident but didn't speak to her,and that she remained in the building for the remainder of the afternoon, a fact that is supported by her signature on the sign-in sheet in the 3rd floor computer room.

Woman: Am I barred from the building?

Chaing [as Everall listens]: Yes, yes. I’m sorry, I don’t want to do that. [uses broken English here] Because you’re not in an appropriate behavior to talk. All your head is sexist, male and female. And then the name; we pay him by that name. What’s the problem here; it’s you, not us.... All you’re thinking is the name and then the male and female thing....Next time, I hope you change a little.

The woman hopes Judy Rogers changes a little. Rogers, in her role as City Manager, has over the last decade allowed human rights abuses in the barring process at Carnegie Center to become an epidemic.
Posted by reliable sources at 2:45 PM 8 comments: