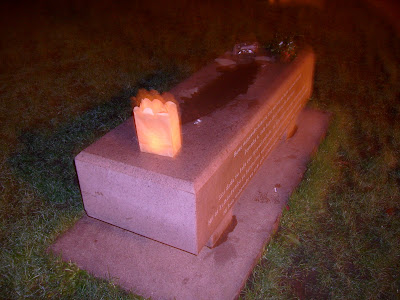 Yesterday was the 18th anniversary of the murder of 14 women at L’ecole Polytechnique in Montreal by Marc Lepine. Last night there were lit candles and fresh flowers on each bench in a large circle of 14 pink granite benches in front of Pacific Station in Vancouver. The benches are a monument to murdered women in Canada, prompted by the Montreal massacre.

Downtown Eastside residents have been known to refer to this monument as the “Wet P*ssy Benches”.

That’s because each stone bench has the shape of a vulva carved into the top of it. What do you get when you carve that shape into a stone bench in rainy Vancouver? A puddle.

Benches that you discover you can't actually sit on are not the only misleading aspect of this monument though. This monument is part of a Canada wide censoring of the real story: the fact that the killing of these 14 women was at least partially a product of the misogyny of Islam.

Media avoid mentioning during events commemorating the Montreal massacre, that Mark Lapine’s name was Gamil Gharbi, until he changed it at the age of 14. That’s a Muslim name. His father was an Algerian-born follower of Islam, whose Canadian-born wife discovered, as she told a divorce court, that he "had a total disdain for women and believed they were intended only to serve men." It’s not an accident that he had that attitude. That’s what Mohammed taught, the prophet who spoke for Allah.

And it may not be an accident that his son Marc Lepine was yelling “alla akber or something…” as he gunned women down, a female witness told a radio station on the day of the massacre. That was reported by writer Mark Steyn, whose source was a good friend in Montreal. But that radio interview was never to be heard again. Censored.

Ayaan Hirsi Ali, a Somalia-born devout Muslim who became a feminist and has written about Islam’s misogyny, says that Islam, unlike other religions, is determined to push the world back into the 7th Century. Islam responded by issuing a death order. She now needs 24 hr. guards. That’s the way Islam deals with feminists. It’s hardly surprising that Marc Lepine yelling, “feminists!” as he gunned down women at L’ecole Polytechnique.
Where the monument gets misleading is on a pink granite track on the ground encircling the benches. On the track are carved the names of hundreds of women murdered by men. This is the treacherous track to moral equivalance. No distinction is made between Marc Lepine and murderers from cultural backgrounds which view the killing of women as an aberration that should not go unpunished. Lepine was socialized under Islam, which teaches that it is acceptable to murder uppity women. Hirsi Ali lived in terror of being murdered by her father when he sent her to Canada for an arranged marriage and she instead detoured to Holland.

In front of the circle of benches is a pink granite arch that reads, "Marker for Change". Come on. Things aren't going to change until people can talk about the contribution of Islam's misogyny to the massacre of the Montreal women without being afraid of the politically correct types -- some of whom were no doubt involved in the planning of the monument -- dismissing them as racist. Until we can commemorate the murdered women by being honest about what victimized them, monuments like the one in front of Pacific Station are just useless wet p*ssy benches in the rain.
Posted by reliable sources at 12:58 PM 1 comment:

Last night at the Carnegie Center Board meeting, a decision was made to remove Grant Chancy from the Board as he has not shown up at a meeting for some time. This means that a by-election to fill Chancy's seat will have to be held.

Michael Read, Secretary, did not want the Board to remove Chancy as it would increase his stress level. Read announced that if the Board did this, he would have to resign too. And he did.

The Carnegie Board is having trouble keeping seats filled. Two weeks after a homeless man, William Simpson, was elected to the Board last June, Carnegie Executive Director Ethel Whitty delivered him a letter from the City barring him indefinitely. He was accused of operating a website which "features links" to a blog which criticizes Carnegie staff. Simpson stands on the sidewalk out front during Board meetings. The incident lead to international news coverage of Vancouver's "blog burning" City staff.

Board member Sophie Friegang wanted a review of the barring of her fellow Board member, Simpson, saying a "terrible mistake" had been made. No luck though. So she resigned too. She submitted a letter stating something to the effect that she couldn't work with a people who did not respect human rights.
Posted by reliable sources at 12:12 PM 1 comment: