Striking Librarians Should Look Up "Fair" 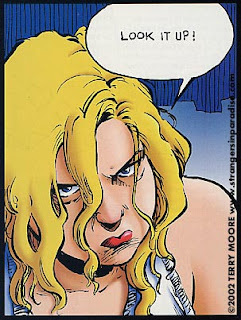 Vancouver librarians have chutzpah. They have insisted that their union, CUPE, secure whistleblower and harassment protection for them in their next contract.

They want their union to obtain for them what CUPE has a record of not tolerating inside it’s own organization.

By now, many of us have heard the story of the whistleblowing secretary inside CUPE. CUPE called the police on this former secretary to two CUPE Presidents when she blew the whistle on CUPE -- and wouldn't stop blowing it when they ignored her -- for operating a "non-union sweatshop". The secretary who had left CUPE with two glowing letters of reference, alleged that CUPE staffed Local 116 exclusively with non-union secretaries who were being fired without warning. The firings always seemed to come after a woman had spoken up about such issues as: excessive workload, the pension CUPE had promised her, or chronic verbal abuse. The fired secretaries had been whistleblowers too.

The library workers Local 391 and other CUPE Locals fund CUPE BC and it’s President, Barry O’Neill, who allowed a letter sent to him about working conditions to be submitted to the Vancouver Police as “evidence” of harassment. They also fund CUPE National, which has allowed a similar letter to their office to be filed in the Police Property office as “evidence” in this case. And they fund the BC Federation of Labour and it’s President, Jim Sinclair, who has allowed a letter addressed to him about working conditions in the non-union sweatshop” to sit in the police Property Office.

And many of us have heard the story about the steamfitter on whom CUPE called the police. The police were called on the steamfitter, a dues paying CUPE member, during a period when he was alleging that money was missing from WCB cheques processed by the employer through the union. The steamfitter who was well-liked amongst his co-workers was required to have a psychiatric assessment and take medication, or lose his job — leading to accusations against CUPE of involvement in “political psychiatry”. The steamfitter’s whistle stopped blowing. His allegations were never investigated by an independent body.

It is not just CUPE leaders who could be seen as having harassed whistleblowers, it is the rank and file too.

CUPE members staffing Carnegie Center — in the heart of the Downtown Eastside poverty industry which is a rich source of union dues for CUPE — were displeased when, for the first time in the 27 yr. history of Carnegie, patrons were blogging about their experiences there. When patrons repeatedly arrived at Carnegie to find doors to taxpayer-funded education and computer services locked by CUPE members (this was unrelated to the current strike), they occasionally reported it to taxpayers through the Downtown Eastside Enquirer blog.

And one particularly loud whistle got blown at Carnegie: when a CUPE member was alleged to have had a series of sexual relationships with clientele, two of whom have killed themselves and one of whom has survived a suicide attempt to live as a quadrapalegic, bloggers reported it. (Bloggers did not claim a direct link between the CUPE member’s sexual relationships with clients and their suicides or suicide attempt.) Her name was not used, though, at the request of sources.

To make the environment safe for the Work Safe complainant, Carnegie Director Ethel Whitty explained at a Community Relations meeting, a homeless man suspected of involvement with the blog had been barred from the building. How convenient. And even more convenient was the fact that the CUPE member accused of serial sexual misconduct escaped genuine investigation.
But a CUPE-supported attempt to silence whistleblowing wouldn't be complete without the lodging of an unfounded police complaint. The CUPE member lodged a police complaint and individuals suspected of blogging or of having been sources for the blog were contacted. A brazen attempt at intimidation, say bloggers.

Long before the sexual harassment story broke on a blog, CUPE members had been working to stop whistleblowing bloggers at Carnegie. Late in 2006, CUPE members -- Rika, Dan, and Colleen --had been involved in a witch hunt at Carnegie in which volunteers were questioned about who had been seen blogging on the public computers. Bill Simpson was barred more than once and CUPE members had a hand in each barring.

Most recently, he was held at the door by Carnegie Security guard Trey, a CUPE member, while Director Ethel Whitty and Assistant Director Dan Tetrault, also a CUPE member who is currently on the picket line at Ray Cam Community Centre) told him he was barred from the entire Carnegie building. They delivered a letter to him from the City stating that he had been "featuring links" to a blog on his website. This barring was later revised by Whitty and the pubic was told -- but never Simpson himself -- that he had been barred because of the Work Safe complaint by a Carnegie staffperson/CUPE member. CUPE members on Carnegie Security continue to enforce the barring of this suspected whistleblower.

Last year a whistleblower blogged about an incident in the Vancouver Public Library, the small branch inside Carnegie Center. A library worker was playing chess with a pal and interrupted the game to call Security to expell a patron who had farted in front of a nearby window. The library worker claimed that the man had farted on a previous occasion and had been warned. The library worker/chess player, a CUPE member, later expressed annoyance that a whistleblower had blogged about this very public incident. He was one of a chorus of CUPE voices inside Carnegie who expressed disapproval of this whistleblowing via a blog. Director Whitty was under pressure -- although not specifically from this library worker -- to bar anyone suspected of blogging from the Center.

Long time Carnegie member, May, stated on Co-op Radio recently that Whitty had told her that she barred a homeless man suspected of being involved with blogging about the Center, not because of any specific behaviour but because staff felt "uncomfortable". But the public incidents reported by whistleblowing bloggers are not libelous, as they can be supported by multiple witnesses and sometimes even documentation, seems to have been overlooked by those Board member Grant Chancey noted at a recent Community Relations Meeting at Carnegie that he assumes this is why no legal remedies have been pursued.

Whitty stated at a public Board meeting on June 25, 2007 that in barring a homeless man from Carnegie for his association with a whistleblowing blog, she went not so much with evidence but with the "feelings" of the staff. CUPE members don't feel like putting up with whistleblowing.
When it comes to whistleblowing protection, CUPE obviously doesn't practice what it preaches. In fact, there is mounting evidence that the public could use whistleblower protection against CUPE.

The word "fair" is being bandied about by CUPE spokespersons during the current strike. What is CUPE's definition of fairness? Maybe it's time librarians look it up.
Posted by reliable sources at 1:43 PM No comments: Links to this post

Another Questionable Barring at Carnegie

On Saturday, I was sitting in a coffee shop near Main & Broadway with a few people from the Downtown Eastside. Bill Simpson, the homeless Carnegie Center Board member who has become notorious for being barred from the entire Carnegie building, walked in to say hi. Then another guy walked in and waved. Bill said, "I know that guy; he's an artist."

"I got barred from Carnegie," the artist said when he approached our table, laughing a little nervously.

The tall, caucasian, twenty-something artist, wearing knee-lengthy grey shorts and a white t-shirt, explained that he had been barred when he walked into Carnegie "the Friday before the strike" with his small two-wheel pull cart (the type people used to bring home groceries or books from the library.) Security guards stopped him and told him that he could not enter the building with the cart. "I told them they were being unreasonable," he said. He argued with them.

By the time they were finished, "there were three security guards and two cops", he said, shaking his head.

The artist was asked by a man at the table to describe the security guards. There was a Black guy and a White guy with a ball cap. He didn't describe the third one.

"Did the Black guy have short sort of dreadlocks?" a woman at the table asked. "Yeah," the artist said. "That would be Trey," she said. But the artist made a point of saying that Trey was not as bad as the other guard, the one with the ball cap. There are two White security guards at Carnegie who wear ball caps, Skip, the Head of Security, and Mike, but we couldn't pinpoint exactly who that second guard was.

The artist doesn't know how long he is barred for. Like most barred people, he wasn't given anything in writing that would identify the reason for the barring or the name of the security guard who had made the decision to bar him from an entire City building. And like many barred people, the artist seems to be intending not to go back to Carnegie.

"It was a blessing," he said, adding that Carnegie Centre is not a good place to be going anyway.

This is only one side of the story of course. The guards no doubt have a different side. A volunteer at Carnegie has explained that the guards are under strict instructions not to allow carts in as part of the battle to keep bed bugs out of the center. He said they also don't want people carting in bottles and cans that they've collected, although the artist wasn't doing that.

The problem is that the apparent lack of due process in the artist's barring is an all too familiar story at Carnegie.

Rachel Davis, a Carnegie Board member, talked about the pattern of barrings without due process at Carnegie on Vancouver Co-operative Radio on July 30. There are rules that pertain to barrings, she said. "[A]ll barrings are supposed to have incident reports attached to that barring but, yes, often there aren't incident reports and if there are, they won't show them to you."
Posted by reliable sources at 1:03 PM 8 comments: Links to this post