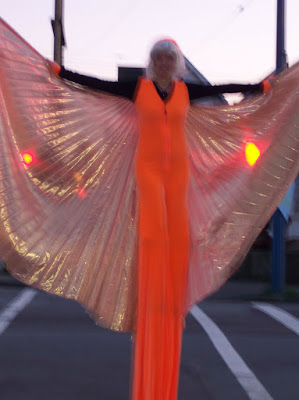 A Downtown Eastsider took this photo of a woman on stilts standing in the crosswalk next to Oppenheimer Park today. The entertainer was at the Homeground Festival, an event to provide Downtown Eastsiders with "sanctuary" from the media during the Winter Olympics. There was a man at the festival taking video with a sign on his back saying, "Official Photographer", but there was also a sign up announcing, 'No Media Zone'.

I only stayed for a few minutes but I heard a woman singing, "Summer time and the livin's easy", and had a coffee. The singer was good and so was the coffee.
Posted by reliable sources at 8:04 PM 3 comments: Links to this post 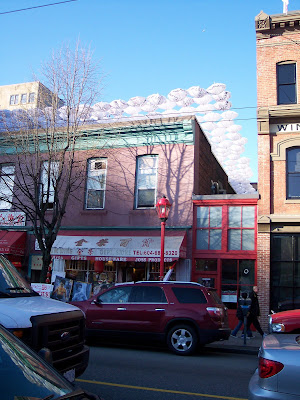 Saw these Chinese New Years decorations on a rooftop in Chinatown Saturday.

Tinseltown mall was crowded with Olympic tourists Saturday afternoon, the busiest I have ever seen it. Usually that mall looks on the verge of bankruptcy.
Posted by reliable sources at 4:56 PM 1 comment: Links to this post