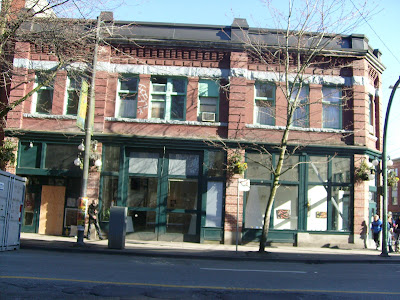 When Earl Stephen “Steve” Seymour was sprayed with bullets across from Pigeon Park on Friday evening, there could have been another victim. Rob Hewitt or his fiancée Venessa Marshall could have been hauled away in a body bag too.

A stray bullet pierced the window of the second floor suite Hewitt and Marshall share on Carrall St. near Hastings. The next day Hewitt noticed an orange dot outside his front door where police forensics had marked the spot where the shell casing had fallen to the ground. [Above is a photo of the building in front of which the shooting occurred. Police searched for bullet casings in front of the door covered with plywood to the left.]

Hewitt, a City employee, is upset about the shooting, according to comments he made to Vancouver's 24 Hours newspaper: "I'm sick of the attitudes towards the people down in this area who say, 'F--k, it's just a drug dealer. Who cares?'

"I care. A lot of people down here care about each other."

Hewitt is keeping the window with the bullet hole, as a reminder of what happened.
Posted by reliable sources at 4:05 PM No comments: Links to this post

Povertarians Witholding Pay from Poor who Participated in Poverty Olympics 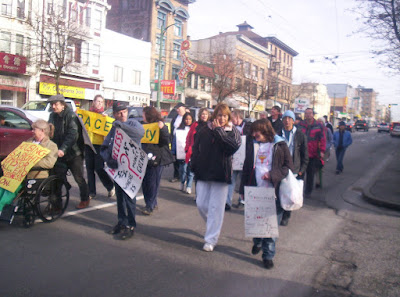 The excuse provided for not paying people, according to one poor person, is that too many "volunteers" showed up and the money is not available. Twenty dollars was no doubt attractive to people living, as CAPP's Jean Swanson claimed in her speech at the Poverty Olympics, at starvation welfare rates, people forced to do all kinds of demeaning things to get the money to survive.

Something to remember when you turn on your tv or open an newspaper and see an anti-poverty event: paying people cash honorariums or volunteer tickets/food vouchers is a regular method used by povertarians to entice the poor to participate in political events.
Posted by reliable sources at 1:19 PM No comments: Links to this post