Looking for the Blog that Miro Cernetig Mentioned in his Column on the Barring of Bill Simpson ? 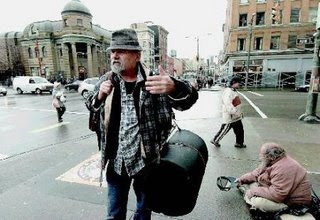 Looking for the blog that Vancouver Sun columnist, Miro Cernetig, mentioned in his Dec. 24th Vancouver Sun column on the barring of William "Bill" Simpson from Carnegie Center? This is it.
Cernetig wrote about the Downtown Eastside Enquirer, although he avoided actually mentioning it’s name. We knew that Cernetig had interviewed Simpson and was writing a column about his barring from Carnegie after being accused of being linked to the DTES Enquirer blog. Simpson told us.

City of Vancouver Bars Elected Blogger From Board Meetings

A free ride to a free dinner. That's what the BC Federation of Labour offered for its 12th annual Christmas Eve dinner at the Maritime Labour Hall in Vancouver. A free City bus left every half hour from the Carnegie Center to take people to the east side hall for dinner. The bus was packed, standing room only. Easily over a thousand people showed up for the dinner which started at about 4:30 p.m., with people coming and going for over three hours.

Santa was there too with gifts for kids, nice gifts, not chintzy ones. One kid got a blue Sesame Street character doll which played a red guitar.

The volunteer servers were in the Christmas spirit, exuding warmth and friendliness that didn't seem at all faked. One server would ask every single person in the food line up, “Do you like brown or white meat?” and she would give you exactly what you wanted.

There was gravy too. And cranberry sauce, the kind which has some of the round berries still intact. The breaded dressing was tasty. It was a more traditional dressing than last year when it was compressed into a loaf from which everybody was cut a slice – although that tasted ok too. The dinner also included mixed corn, carrots, and a bun. For dessert there was a selection of pies, including pumpkin pie, my favorite.

The servers constantly circulated, asking if you would like more pie. One guy at my table worked through a few pieces of pumpkin pie and one which I think was apple. He wondered if the server thought he was packing it away to take home – he did take one piece of pumpkin pie home – because he noticed that eventually, “When she saw me, she would turn the other way.” That’s the same guy who joked, “Hey Santa, cut your hair you fuckin’ hippie.” Santa didn’t laugh.

And there was coffee, tea, juice, and pop. The BC Fed was a little more street smart this year. They gave out only open cans of pop and juice boxes. They discovered last year that the underclass was prone to sticking a few extra cans of pop or boxes of juice in their pockets to take home.

There is one way the BC Fed out does most of the other Christmas dinners attended by the underclass: they don’t mind if you go back for seconds.

Jim Sinclair, President of the BC Fed, was at the Christmas Eve dinner, as he is every year. He doesn't just make an appearance; he stays for hours dishing up food, chatting up pork choppers, always wearing a red and white hat like the one Santa wears. But it is getting more difficult for Sinclair to pass himself off as jolly and benign. Because the secretaries won't shut up. The problem started when secretaries at CUPE Local 116 – CUPE staffed that office with non-union secretaries -- began speaking up about unfair labour practices. One secretary wrote to Jim Sinclair about the double and triple workloads and office rage she had been expected to absorb from the union brass. She later discovered that the letter had been turned over to the Vancouver Police, which doesn't even have jurisdiction at CUPE 116, and she was investigated for “WORKPLACE HARASSMENT”.

When the secretary reminded Sinclair and CUPE boss, Barry O’Neill, that a woman speaking up about working conditions is not engaging in workplace harassment, something happened that was as mysterious as Santa sliding down your chimney to surprise you with a gift. The “workplace harassment” offense for which she had been investigated and cleared months earlier, suddenly got retroactively changed to “HARASSMENT/OBSCENE COMMUNICATION". What is harassing or obscene about speaking up about working conditions, she would like to know. But that was not a question to ask Sinclair on Christmas Eve, when he was spreading goodwill.

There was lots of goodwill in the donated clothing room at the BC Fed Christmas Eve dinner. One woman at the dinner got a crisp, white, fitted shirt. And she got some brown jeans, a tad faded. "I've worn them both twice already," she has since told me. A man, a former False Creek squatter who now works off and on doing car repairs, told me the other night that he had been at the Maritime Hall dinner and got a beige golf shirt as well as a t-shirt with a Fire Department logo on it. In addition to clothing, the servers let him take home an extra dinner for his roommate.

A guy who came really late was given some potatoes and vegetables. The turkey had run out, so they gave him a whole apple pie to take home to make up for it.

There was a live band playing upbeat Christmas music. The musicians were enthusiastic. But the music was too loud; it was well beyond the level allowed by WorkSafe BC. Bill Simpson, a homeless guy from the Downtown Eastside, came over to our table to say hi, and had to lean over and position his mouth just inches from a person's ear to be heard.

Simpson was chatting about an article in the Christmas Eve edition of the Vancouver Sun. He had been quoted in the article as saying that workers in the Downtown Eastside poverty industry [most of whom are BC Fed members] are "co-dependent" on the poor they serve. In other words, they need the poor to stay poor as the poverty industry is a goldmine of high salaries and union dues.

Everybody walking into the Martime Hall on Christmas Eve was met by two friendly hostesses who said "Merry Christmas", and handed them a ticket which they could exchange on the way out for two small grocery bags filled with carrots, onions, and potatoes.

You can go to the BC Fed Christmas Eve turkey dinner, whether you are poor or not. You can count on nobody being too concerned about who you are. At Christmas everything changes.
Posted by reliable sources at 10:28 AM No comments: