Photo:  Waves coffee shop at Main & Cordova
I wonder if the Waves coffee shop that just opened at Main & Cordova will make a go of it. The coffee shop, which has replaced Vic's restaurant, doesn't draw much of a crowd at night. It's not as welcoming an environment as the Waves on Hastings St. at Richards. And on Sunday and Tuesday nights, if you sit on a stool in the window sipping your tall latte, you're faced with the long line-up at the Sally Ann soup truck which parks across the street to feed the penniless. 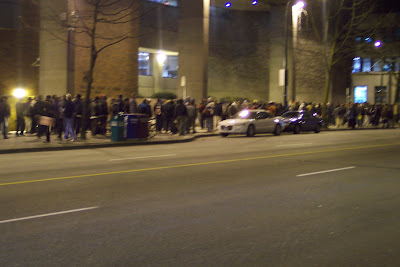 I was listening to a CKNW radio interview recently with a guy who said he owned three Waves coffee shops on the Downtown Eastside -- one at Main & Pender which closes at 10 p.m., one at Hastings & Richards which is open 24 hrs., and one that just opened at Main & Cordova which closes at midnight. He was emphasizing what a fabulous relationship his staff have with the Downtown Eastside community.
This fabulous relationship does not include hiring Downtown Eastsiders. None of his staff have that lived-in look of Downtown Eastsiders. His taste runs to recent Russian immigrant women in their late teens or early twenties. I would say the Richards St. location is exclusively staffed with young Russian women. A couple of young Russia men have also managed to get hired there on the all-night shift. I don't hang out in the Pender St. (Chinatown) location near Carnegie Center; it seems less Russian.  I've seen a Chinese woman working there. A woman who regularly works evenings at the Cordova St. location seems Russian to me, although a man at Carnegie has since told me he believes she's German).

Regardless of where this young, heavy-set woman with a blond ponytail came from, she comes across like a school marm who would love to swat a Downtown Eastsider across the ear with a ruler.

There was a group of regulars in there on Friday night recently -- they used to show up at the Cordova St. Waves a little after 10 p.m. and when that location closed, they would sometimes head up to the Richards St. Waves -- and this staffer caught one of them eating a stick of stuffed celery as she chatted with friends staring at their laptop screens. The staffer walked over to the customer and scolded her, "You can't eat your own food in here." The customer said, "Ok". But the staffer returned for a second go-round, snapping at the customer about how the next time she had her own food, "I will ask you to go outside."

"What did she say?", a regular male customer, a t-shirt artist with a studio up the street, asked. "She wants us to eat those terrible sandwiches they sell," a man who buys lattes there on a regular basis called out.

You'd think the staffer would be grateful to have a group of regulars in an almost empty restaurant on a Friday night, I thought.

Then the staffer did the unthinkable. She switched off the internet without telling customers. It was not yet midnight and one man had just bought a coffee and was pissed off that he couldn't surf the net while he sipped it. He politely asked her -- she was by then mopping the floor around his table with Lysol -- if she had turned it off. She said she had, "You're always here late and we're closing. We have to go home." He pointed out that usually they lock the door to new customers at midnight but let people already inside finish their coffee. "We'll take our business elsewhere," he announced to his friends. "We'll tell Bill to get a blogger to write her up", he said laughing.

He then held up his paper cup of coffee saying, "This cup is leaking." The staffer nonchalantly replied, "Some of our cups are leaking tonight," as she continued to mop around him. "Some?", he said. Familiarity breeds contempt. I know that's a cliche but it seems to be exactly what was happening here. The staffer slipped a second paper cup over his leaky one.

As he was leaving, he announced that there was too much water on the floor from the mopping. "That will ruin the floor," he said. Outside the door, he stood on the corner yelling, "Leaky cups! No internet! What next?! If you have leaky cups, you don't serve them, you tell your supplier!" Another regular guy interjected, "Maybe she had no other cups. She was nice to me,"he said, "She said goodnight. Stay on good terms with them. It's good to have wifi in the neighborhood."

They turned to walk up Cordova, taking their business elsewhere. To Waves on Richards, owned by the same man.

That was two weeks ago and when I've since walked past Waves on Cordova at night, I've looked in the window to see if the regulars were there. They weren't.  So I asked the guy who got the leaky cup and he confirmed, "We don't go there anymore."
Posted by reliable sources at 9:48 PM No comments: