'Bike to Work Week' Wraps Up with Party in the Park 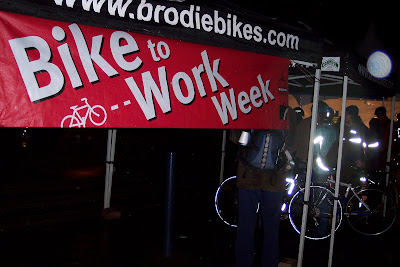 Bike to work. On second thought, don't. It will mean more bicyclists on the sidewalk.

I feel like the guy quoted in the "Rant" section of the Westender newspaper: "Why don't pedestrians just walk along the curb. That way bicyclists could have the sidewalks all to themselves."

Even though I've lost my taste for cyclists, I enjoyed the party hosted by the Vancouver Area Cyclists Coalition in the park on Friday night to wrap up Bike to Work Week. 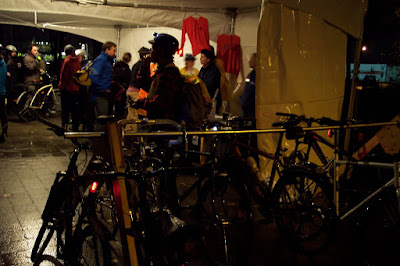 The party was held from 4-7 p.m. by the bandstand in the park adjacent to Science World. A steady stream of cyclists whiz through that park. And last night in the rain, they had hot coffee waiting for them under a tent. 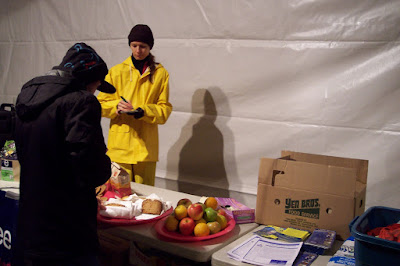 Other goodies were also given out under the tent, out of the rain. I had a piece of cake with chocolate swirls in it, the type you get at Starbucks. And later I had a low-sugar oatmeal cookie and an apple.

There was lots of literature there for people to pick up too. I took a copy of the Coalition's newsletter. I could see that a lot of work had gone into it. This is clearly a well organized group. The fact that they had obviously wrangled a coffee donation out of Ethical Bean which had it's name prominently displayed, is one indication they're organized. 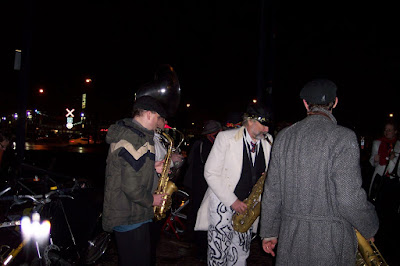 There was live music too, by the Carnival Boys. A few bicyclists were dancing in the dark by the bandstand.

The event was intended to encourage winter cycling. A Cycling Coalition rep with a gray beard invited me to help myself to coffee. He explained that the Coalition has held two Bike to Work Weeks in the summer, but this is the first time they've held one in November. 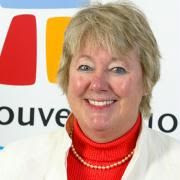 Furlong has been asked to remove Judy Rogers from VANOC until a criminal investigation into fraud that occurred under her watch as City Manager has been completed. Mayor Sullivan was asked prior to last week's election to ensure that a criminal investigation is carried out into Rogers subordinates Ethel Whitty and Skip Everall, but Rogers was named in the complaint as well.

The DTES Enquirer has learned from two reliable sources at Carnegie that the request was made – we hope to obtain a copy of the request -- by a representative of a woman who alleges that in June 2008, under Rogers’ watch, “15 witnesses” were fabricated against her and entered into the City of Vancouver Security computer system. None of these witnesses have ever been named. "They don't exist", the woman has maintained over the past five months. Yet these witnesses are being used to present her in the City Security computer data base and in paper files as having posed a risk at Carnegie serious enough that she had to be banned from an entire area of the building.

City staff under Rogers have for five months avoided interviewing a Carnegie member who has information that would contradict the existance of these "15 witnesses". In fact, there is evidence that Everall has been attempting to prejudice this witness.

It was also fraudulently claimed in the Security report that the targeted woman had behaved in a similar manner in the past. When she asked what evidence was being used to support this claim, neither of Rogers' subordinates at Carnegie, Skip Everall or Ethel Whitty, could identify any. But rather than deleting the false claim from the Security report, City lawyers pondered over it for two weeks. "They were looking for a way around liability", says the targeted woman's boyfriend. Finally, a carefully worded sentence was added to the back page of the report -- where nobody will see it -- stating that this claim could now be disregarded. "I want it expunged. They made it up!", the woman exclaimed while sitting on the Carnegie patio in September.

Furlong was informed that Carnegie Center, Judy's Guantanamo Bay, has become a place where the accused are expected to serve sentences while being denied basic constitutional rights. Under Judy Rogers, low income people who can't afford lawyers are sentenced to suspensions from Carnegie Centre and are expected to serve their sentences BEFORE being allowed to appeal. They can appeal only to ensure that their sentence isn’t extended further. Any assertion of rights by the accused during the appeal meeting tends to be viewed as insubordination and grounds to impose a longer sentence. It's not uncommon for those suspended -- banned or barred or other terms used -- to be required to serve their sentence before they are considered eligible to be told why they are banned. Evidence against them and names of witnesses are routinely withheld. Hearsay is often the trigger for a banning.

Rogers and her subordinates at the City and Carnegie have been criticized for ongoing human rights abuses at Carnegie Centre. They received considerable negative publicity after banning a homeless man from the Centre two weeks after his election to the Carnegie Board of Directors, denying him access to Board meetings. The woman who signed the letter banning the homeless man, Jacquie Forbes-Roberts, retired after lawyer Gregory Bruce told the City in writing that they were acting “contrary to the rule of law”. The timing of the retirement was suspicious in the view of some Carnegie members.

Word is that the woman targeted by a mysterious "15 witnesses" will ask Olympic sponsors to stop supporting 'Guantanamo Judy'. Anybody at Carnegie who knows her, knows that she is determined to clear her name and and get the fabricated witnesses and the resulting security report removed from the City computer system. Has Judy met her match?
Posted by reliable sources at 1:48 PM 2 comments: Links to this post