What man would put his name on a Simon Fraser University Department which for years allegedly operated a sexual harassment ring?

Audain, Chair of Polygon Homes Ltd., slapped down $2 million dollars for the SFU Center for the Contemporary Arts where the main exhibition hall will be named the Audain Visual Arts Teaching Gallery. His donation will also establish an Audain Visiting Chair in Visual Arts.

The Visual Arts Department appears to have been the worst offender when it comes to sexual harassment in the Center for the Contemporary Arts. That’s according to a woman who dropped out of Visual Arts due to being chronically sexually harassed by two professors in the 1980’s. She claimed in a written statement to SFU that her life was ruined by being unable to graduate.

“All studio courses were taught by male professors,” says the woman who dropped out, “and all of them were trying to get laid.” She adds, “This was going on for years.” It started long before she arrived, she says, and she doesn’t believe it suddenly stopped when she dropped out.

She believes though that the sexual harassment would have diminished in the years after she dropped out, as two of the offenders eventually left to teach at other institutions. But one offender remained and was promoted to Head of the Visual Arts Department. “They promoted him after I exposed him,” she says. She suspects this professor became more discreet after she exposed him but she doubts he stopped treating his classes as “harvesting sites” for sex partners. “He was so compulsive about it, I just can’t see him quitting completely.”

She provides one graphic example of his compulsive sexual harassment, an incident which occurred during a first year studio class. As was typical in studio classes, the professor would rotate around the room, visiting each student at their small work space to discuss the project they were working on. These visits would last at least 15 minutes. When this professor arrived at the work space of the woman who would eventually drop-out, she was talking to him about her project when he locked his eyes on her nipples. “He stared and stared at my nipples,” she says. “He wasn’t hearing a word I was saying.” He never once looked up from her nipples to her face while she was talking. She still remembers what she was wearing that day, a navy blue ski turtleneck; the studio could be cold at times. “I was talking to him about my project and he wasn’t hearing, he was fixated on my nipples [she makes googly eyes to illustrate]; he was in his own little world; it was like he was in a trance. He was getting aroused right there in the studio! I just kept talking, trying to act normal; I thought he would snap out of it.” Then he abruptly walked out of the studio, without saying a word. "It was rare for him to walk out of the studio while class was in session,” she says. “I remember it happening one other time; it was when an older student named Daniel told him he thought his wife was on campus looking for him.”

This professor as well as all other Visual Arts professors trying to get laid had spouses and children. One was reportedly separated — but as one Dance student who entered a sexual relationship with him found out, he had no intention of divorcing his wife. He later re-united with his wife.

The woman who dropped out says sexual harassment was a problem not only in the Visual Arts Department but throughout the Center for the Arts – which housed departments of Film, Dance, etc. — as early as the 1970’s. She refers to it as the ‘Center for Tits and Ass’.

But it could now be called the ‘Center Flush with Cash’.

Fifty million dollars is being given to the Center for the Contemporary Arts by the Liberal government, B.C. Premier Gordon Campbell announced last year. The Center has set a goal of raising another $30 million from the private sector. So far $17 million has been raised. This is upsetting to the woman who dropped out and now lives a few blocks away in the impoverished Downtown Eastside.

The woman who dropped out says there is a possibility that SFU President, Michael Stevenson, concealed from Audain the festering issue of the sexual harassment ring that harmed her ability to graduate. “There is no doubt that Stevenson is aware of this issue and he should be disclosing it to donors,” she says. She was in email contact with Stevenson as recently as last year; his receptionist acknowledged that he had received the email. Stevenson was also copied a letter addressed to Dr. Ernie Love last year. Love, Head of the SFU’s new Segal Graduate School of Business, was told in the lengthy letter that it was inappropriate for SFU to be building a global reputation with ‘expansionist projects’ while continuing to bury it’s history of operating a sexual harassment ring.

But Stevenson would not have been entirely able to conceal SFU’s alleged sexual harassment record from donors now that the story has broken on the internet. “If Audain had done a Google search, he would have come across it,” says the woman who dropped out. Articles criticizing Premier Campbell for handing $50 million to a Center which has persisted in evading its sexual harassment history, have appeared on internet news sites, Blogger News Network and NowPublic, as well as on the Downtown Eastside Enquirer blog.

Despite the internet raising public awareness about the Visual Arts Department’s reputation as a haven for professors who “preferred to teach female students flat on their backs”, the woman who dropped out doesn’t expect to see him take a stand on the issue any time soon. She points out that he’s established a business relationship with SFU that he would no doubt want to preserve: he was the developer of a housing project at SFU. “He may owe them a favor; maybe he expects there to be another housing project up there in the future and he’d like to get in on it. I don’t know but it looks to me like he has an ‘I’ll scratch your back if you scratch mine’ relationship with SFU.”

When SFU granted Audain an honorary doctorate, he was described in their literature as a lifelong civil rights activist, starting as a young man by “joining the Mississippi civil rights marches against racial segregation.” He was once even thrown into prison in Mississippi for standing his ground in the Black section of a restaurant in a bus depot, refusing to leave. Audain went on to hold the first meeting of the BC Civil Liberties Association in his living room. According to SFU literature, “Michael Audain puts his beliefs into practice.”

“I’d like to see him put his beliefs into practice”, says the woman who dropped out of SFU due to alleged chronic sexual harassment. “I was denied my right to an education.” She would specifically like to see Audain put his beliefs into practice by putting a ‘Stop Payment’ on his cheque and, “at the very least” taking his name off the Center for the Arts until the it’s history is addressed.

Last week, a Downtown Eastside Enquirer writer emailed Audain — SFU published Audain’s email bbinns@polyhomes.com on their website — and asked if he saw a contradiction between his history of taking a stand on Black civil rights issues and his current endorsement of the SFU Center for the Contemporary Arts which has a reputation for interfering with the right of females to an education. No response was received.

Audain may not acknowledge receiving the email but, being a product of 1960’s activism, he would surely acknowledge having heard the John Lennon/Yoko Ono tune, “Woman is the Nigger of the World.’

Posted by reliable sources at 6:57 PM 2 comments: Links to this post 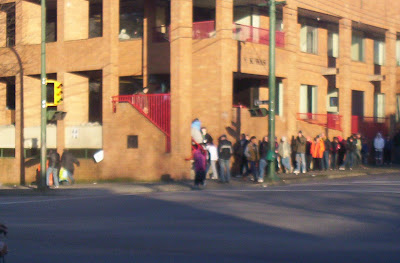 A group calling themselves, "Raise the Rates", wants welfare rates doubled in British Columbia. They want the Campbell government to pony up $1,300 per month for each welfare recipient. That figure is based on the Market Basket Measure, anti-poverty activist Rolph Auer explained in the Jan. 15th Carnegie Newsletter. The MBM calculates the cost of food, shelter, transportation and other commodities a person needs just to get by.

Raise the Rates would also like people on welfare -- Income Assistance is what it is officially called -- to be allowed to earn at least $500 on top of their welfare cheque. On this point, they have something in common with the right-wing Fraser Institute which supports an earning exemption for welfare recipients. The Fraser Institute believes that allowing welfare clients to earn a bit of money keeps them connected to the work force. Oddly, welfare recipients who have "unemployable" status due to either a temporary or longterm disability, are the only ones allowed to earn extra money while on welfare. Employable people are forbidden from taking jobs without having the amount earned deducted from their cheque. If they don't report the earnings and are caught, they will be kicked off the welfare rolls and possibly charged with fraud.

Regardless of the current low welfare rate which, according to Auer is $610 per month for a single person, there is a healthy demand for welfare judging from Wednesday’s line ups. There were two line ups at one Downtown Eastside welfare building at Powell & Main St., one line up along Powell St. and another along Main Street. There are two welfare offices in the same building, one upstairs and one downstairs. Most clients lining up for a welfare cheque are male, and one client pointed out that many in the line ups this month were young. The above photo of a line up was taken around 3:30 p.m. and there was still a line up. It lasted until after 4 p.m.

At least one line up at the welfare office continued all day Thursday. [Update: Again on Friday, there was a line up.]

Clients line up at their welfare office if they have not arranged to have their cheque mailed to their home or directly deposited in their bank account. They also have to line up if they have neglected to sign and turn last month's cheque "stub" -- a short form attached to all welfare cheques -- in to the welfare office. The stub acts as confirmation that you will need assistance again next month (i.e. you haven't found a job.)

Welfare day on Wednesday ended a "five week month." That means welfare recipients had to make their December cheque last five weeks, rather than the usual four weeks. But the amount of the cheque is the same whether it's a four or a five week month. Anti-poverty advocates would like the government to put an end to five week months.

At the end of a five week month, if a person is hungry, they can sometimes get away with hitting a welfare worker up for a $20 food voucher. But welfare workers don't like clients to make a habit of asking for vouchers. If you regularly show that you can't manage your money, the welfare office will manage it for you. The welfare worker may put you on what Downtown Eastsiders refer to as "administered", which means you are issued a small cheque once a week.

The long line ups at the welfare office this month are a mystery as Vancouver’s pre-Olympic economy is going full tilt and employers are begging for workers.
Posted by reliable sources at 2:05 PM 4 comments: Links to this post