Who is on Welfare? 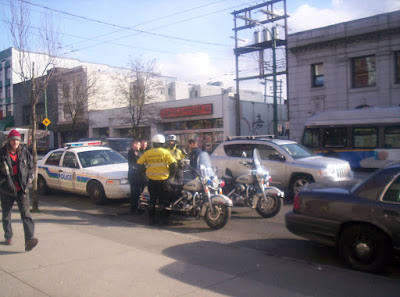 Today is welfare day and five cops -- four uniforms and one under cover -- were standing around laughing and shootin' the breeze in front of Pathways Employment Center at Main & Hastings. The under cover waved at the photographer when he noticed the camera pointed at him. The photographer says the cops were standing around for at least half an hour. When she arrived at Pathways a little after 3 p.m. they were there, and when she looked out the window at almost 3:30, they were still there.

But a Carnegie member says the cops were there for longer than half an hour. "I figure a good hour," he says. He repeatedly noticed the cops as he did his errands this welfare day. He went to the Quest food store on Hastings just east of Main, browsed around and bought some chicken. Then he went to the TD bank on Main St. near Hastings, then on to VanCity on Pender St. Then he went to Carnegie Center at Main & Hastings and had a bowl of soup. Then he dropped in briefly to Pathways to chat with friends and went on to the Empress Hotel, just meters from where the cops were standing, in search of another friend. Then he went back to the Quest food store, then home on Powell where he stayed for about 15 minutes feeding his animals, etc. On the way back, he dropped off at another social housing building and buzzed a friend who wasn't home. Then he came back to Carnegie. "The cops were still there", he says.

One observer said it was possible that a shift change was occurring. Whatever, it is not uncommon to see cops standing around schmoozing on the Downtown Eastside. Last year, I was walking from Chinatown to Main & Hastings and saw a couple of cops arrive and pull a guy off a bus. Then four back up cops arrived, but the suspect was already lying on the ground handcuffed. Afterwards the six cops stood around chatting for 15 or 20 minutes. Of course it's human nature to feel the need to debrief, but this down time has to be considered when the police union and Chief argue for more money to hire more officers because they are run off their feet.

Before submitting the above photo to the DTES Enquirer, the photographer asked a guy at Carnegie, not entirely jokingly, "Do you think [the cops] will kill me?". The guy laughed and said, "No."

The Vancouver cops do deserve praise for their performance over the past week. They quickly apprehended the man suspected of pumping a few bullets into the head of Nova Scotian, Steve Seymour, at Pigeon Park on Friday night.

Despite the many competent cops, though, the public is losing confidence in the VPD due to their persistent covering for cops against whom there is clear evidence of wrong doing. An example is Sergeant Garry Lester, whose documented involvement in "political psychiatry" in his role as VPD School Liaison and the alleged cover-up by the VSB and the VPD has been highly destructive. It has resulted in Canadians Opposing Political Psychiatry organizing, as a last resort, an international boycott of diplomas issued by the Vancouver School Board.
Posted by reliable sources at 3:31 PM 2 comments: Links to this post