Let Them Eat Turkey: The Sequel 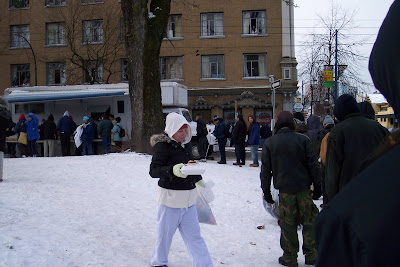 Last year, I wrote,"Let Them Eat Turkey", about the annual Christmas dinner hosted by the film industry at Oppenheimer Park on the Downtown Eastside. This year's Christmas dinner took place today.

The annual dinner is Hollywood North's way to "give back to the community" which is a magnet for filming due to the 'gritty' nature of the area. Unlike residents of more affluent areas such as Kerrisdale, Downtown Eastsiders are not paid for filming disruptions. They are reminded that there will be turkey at the park at Christmas.

"And so this is Christmas and what have you done?" The film industry delivered another Christmas dinner today, as tasty as last year's: peas, carrots, mashed potatoes, gravy, turkey, dressing with mushrooms, and cranberries. The workers continued to be cheerful. The line-ups for turkey continued to be long. 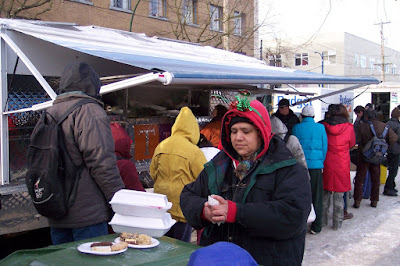 The film industry has continued it's less than stellar performance on health and safety regulations when it comes to Downtown Eastside residents. One woman in the line-up told me that Muriel Honey at the City Film office is still giving permits to the film industry to park film trucks and dressing rooms with generators outside her only window, even though they promised to stop after she got ill from fumes. (She promised to send me photos of the trucks and dressing rooms that she took when they were parked there on Remembrance Day.)

Photo above: This woman was in a festive mood, wearing Christmas bows on her hood. 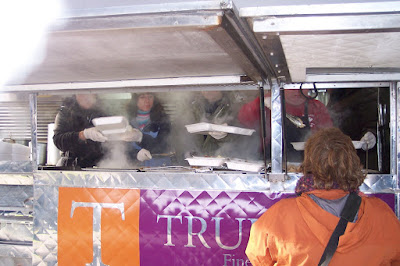 One man who had waited in line in the cold for half an hour -- not everybody had to wait that long -- called out to to the staff working over the steam trays, "You guys have the warmest spot." 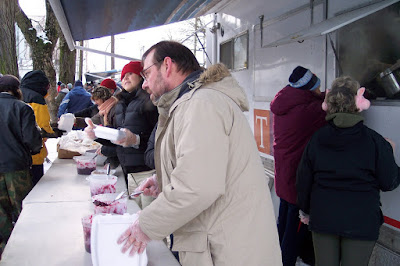 It was cold outside today. Note the bunny ear muffs on the female server on the right of the photo, standing by the window of the catering truck. 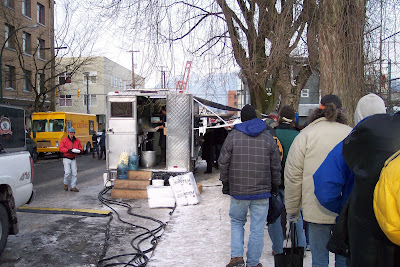 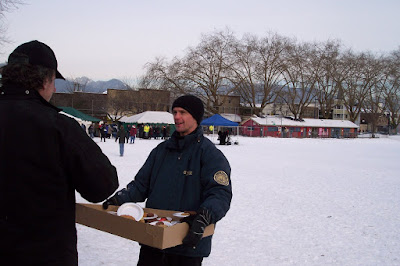 A worker gives out plates of desserts. In the background of this photo is Oppenheimer Park.

There was a variety of cookies and cakes for dessert. I got a chocolate cookie with real chocolate chips, an almond cookie, and a date square. They seemed to have been made from scratch. Later a young woman came around and gave out muffins, the large ones that they often sell near the cash register in corner stores.

At the beginning of the event, there was a small tent in the middle of the park where a couple of bands played.
Posted by reliable sources at 4:10 PM 2 comments: