Will Heather be your pick?

I thought the Wilderness Committee was about saving trees, not cutting down Israel.

But it was on the Wilderness Committee website that I saw an announcement* for Saturday’s launching of a boycott of Chapters-Indigo books. On the Wilderness Committee website, space was turned over to boycott organizers to remind readers that Israel-supporters Heather Reisman and her husband Gerry Schwartz are the primary owners of this bookstore chain. And to warn customers that this couple is up to no good. 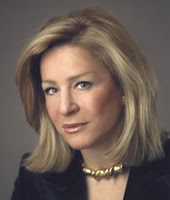 “A bookstore that kills?”, was the message scrawled on a piece of beige cardboard held by a twenty-something woman standing by the front door of Chapters in downtown Vancouver yesterday. She was one of 10 people standing in front of the Robson St. store, the one in the new building designed to look like it’s toppling over, the one where you can buy a book or a Starbucks coffee. The protesters stood holding placards or handing out leaflets or asking customers to think twice before buying a book that would put money into the pocket of Heather Reisman. At the bottom of the placard was the web address: www. newsocialist

A man in his early twenties with short brown hair stepped toward me and said politely, “Would you like a flyer?” “Boycott Chapters-Indigo?” he continued as he handed me a white and black flyer. He had a spiel and he said it all in one big mouthful: “We’re boycotting Chapters for their support of Israeli apartheid and Israeli war crimes against Palestinians and their support of the Israeli defense force. So we’re boycotting Chapters because of their funding and their support for that.” 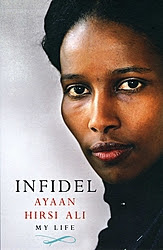 Heather Reisman, being not a new socialist but a smart capitalist, saw these people coming. She tried to sell a book to customers whose attention they were turning to Middle Eastern issues. She put “Heather’s Picks” on prominent display just inside the door of the store. Heather’s Pick: “Infidel” by Ayaan Hirsi Ali, “a great book personally chosen and loved by Indigo CEO Heather Reisman – 20% off, members save 10% more." Heather 's Pick: "In the name of Honor", by Mukhtar Mai. Both Ali and Mai speak out about the pernicious abuse of women by Islamists, the Islamists with whom the leftists on the sidewalk out front had aligned themselves. Heather was making a buck and making a point.

Heather is facing a boycott that is well organized though. There was a long, professionally printed, dark blue and white banner about 10 feet long, with protesters taking turns standing at each end holding it up.

In Victoria “bi-weekly actions” are being held at Chapters on Saturdays. And there is a Canada-wide “day of action” planned for June.

In the black and white flyer – there was a second flyer too, a coloured one – the boycotters went into more detail about what Heather had done to motivate them to spend a Saturday afternoon working the sidewalk crowd:

Heather Reisman and Gerry Schwartz – majority owners of Chapters and Indigo bookstores – are the founders of the ‘Heseg Foundation for Lone Soldiers’, which provides scholarships and other financial support to soldiers in the Israeli Military on the basis of need and military ‘achievement’. At its peak, the foundation will distribute up to $3,000,000 annually to former ‘Lone Soldiers….

Former lone soldiers. The brochure was contradicting the message scrawled on the young woman’s killer bookstore placard: “Up to 3 million a year given to Israeli’s oppressive military.” That sounded like current military personnel, not former.

Accuracy, say critics, is not a strong point of those protesting against support for Israel. That’s why there are Chapters customers who will not stop shopping there for books. Their attitude is closer to, ‘Shop ‘til you drop.’

One critic of the protesters in front of Chapters is Dag Walker, a founder of the Vancouver chapter of the Blue Revolution, a movement which is big in France and budding in Canada and other countries. Blue Revolutionaries take the attitude that the world is better off with Israel and the U.S. and that western leftists aligning themselves with Middle Eastern Islamists are misguided. The Blue Revolution in Vancouver is, like the boycotters who showed up at Chapters, a small but committed group. And like the boycotters, they welcome anyone whose thinking is similar to theirs on this issue; in fact, they wear blue scarves at their public meetings so that they can be easily spotted by newcomers. They’ve been meeting every Thursday evening for the past year and a half at the Vancouver Public Library, rain or shine – mostly rain – in front of the Blenz coffee shop in the lobby.

I know Dag Walker but I’m not involved with the Blue Revolutionaries. I did know that they were pro-Israel; it was the black cap with the small Israeli flag on the front that I saw Walker wearing on his way to one of their meetings that first tipped me off. So I asked Walker how the Blue Revolutionaries would view the group who launched the Chapters-Indigo boycott yesterday. “We call these people Death Hippies,” he told me. “If they protest against Chapters supporting Israel, we’ll protest against them supporting terrorism.”

In fact, there is talk amongst the Blue Revolutionaries of changing the location of a future meeting -- to the Starbucks coffee shop inside Chapters, in the building that appears to be toppling over. They want to make a point, a point similar to the one made with Heather’s Picks.

Clearly, there is more than one perspective on the support for Israel by Chapters-Indigo owners Gerry Schwartz and Heather Reisman. The next time you’re shopping for a book, you can either buy from Heather or boycott her. It’s your pick.

* Since this story was published, the Wilderness Committee has 'disappeared' the announcement for the Chapters boycott from their May calendar -- although they left every other past entry intact on their calendar. The DTES Enquirer had made a copy, though, of the full page of material that the Wilderness Committee ran at their site to encourage people to attend this boycott.

Posted by reliable sources at 1:46 PM No comments: