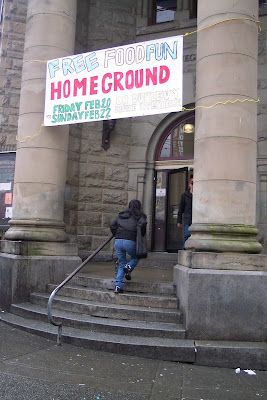 Photo:  Front steps of Carnegie Center on Sun. Feb. 22/09
Why is John Ferguson's band getting one of the few paid gigs at Homeground, a festival being held this weekend on Dunlevy St. next to Oppenheimer Park on the Downtown Eastside?  The Downtown Eastside is not Ferguson's homeground.
Downtown Eastside musicians who live and hang out on the Downtown Eastside would have loved to get tonight's two hour paid gig at Homeground. The Homeground winter festival is a trial run for next year's Oasis Festival in which Downtown Eastsiders will be kept occupied at Oppenheimer Park for the duration of the 2010 Winter Olympics.  Taxpayers fund these festivals -- which some Downtown Eastside residents say are a grab by povertarians for a chunk of the City's $1 million Olympic Sustainability fund -- under the guise that they are an effort by Downtown Eastsiders to work with one another to enhance their lives.
Not only does John Ferguson not live or hang out on the Downtown Eastside, his record in relation to Downtown Eastside residents has been far from life enhancing.  His alleged record includes stripping Downtown Eastside residents of their civil rights and dignity.  For years Ferguson worked as Carnegie Security boss -- he was a CUPE member -- enforcing a "security" system which involved routinely banning people from City facilities without due process. Ferguson is now retired from that job and enjoying a good pension ....topped up with paid gigs that Downtown Eastside musicians living hand to mouth would love to get.
While Ferguson is getting a paid gig, several long time Downtown Eastsiders in the Carnegie Music program say they have been invited to play at the Homeground festival -- as volunteers. They doubt they will even get the food vouchers worth 80 cents an hour that Carnegie generally gives volunteers.
The miffed musicians acknowledge that Ferguson does have some Downtown Eastsiders in his band.  But they say these musicians tend to be the favoured few, people who get to "play all the time."  One such musician played in both the recent Shadows Project and the Condemned Opera, as well as playing with Ferguson at Homeground.  (Another Downtown Eastsider in Ferguson's band, Brian, is exempt from criticism as he's still "new", say musicians, so he doesn't have a history of playing more than his fair share.)
The problem with staff or former Carnegie staff/CUPE members such as Ferguson coming to the Downtown Eastside and essentially taking food out of the mouths of neighborhood musicians is not new.  Two other Carnegie staff persons, Peggy and Sue, have been accused in the past of turning the Music Program into a "staff perk".  Peggy, a musician, was a Carnegie Street worker and on-again-off-again girlfriend of Carnegie security guard Ken Tenake.  [She now runs the Music program at the Health Contact Center next door, although she has been off work for awhile due to a car accident.)  Sue, also a musician, worked for the Carnegie Street Program and eventually got into a relationship with musician Mark Oakley, who eventually got a job running the Carnegie Music Program. This band, which at times included Carnegie security guard John"Trey" Williams as drummer, became known as the "staff band" by neighborhood musicians.
The staff band "monopolized the Music Program", says a musician. "This went on for three years!"  None of these staff musicians live on the Downtown Eastside.  John Williams lives way the hell out in Chiliwack! (although he's reputed to be one of Carnegie's better security guards, less prone to power-tripping than some.)
Who is supervising the Carnegie Music Program to ensure that taxpayer funding for Downtown Eastsiders reaches Downtown Eastsiders?  Rika Uto is supposed to be supervising. According to one musician though, "Rika doesn't want to offend anyone".  But by not doing anything [about the problem], you offend people".
Uto is supposed to be supervised by Dan Tetrault, the Assistant Director of Carnegie, but she's his girlfriend, according to musicians.  So he's hardly in a position to say, "Buck up little pony, you've got a job to do."
Did I mention that retired CUPE member John Ferguson showed up to support Tetrault and Uto, and another supervisor of musicians, Colleen Gorrie, on the picket line during the last CUPE strike.  But of course, that wouldn't explain why Ferguson was given the next two highly coveted New Years Eve dances in a row -- reportedly $750 each -- as well as the last Christmas volunteer dance, and now of course the Homeground festival.
So while Tetrault supervises Uto and Gorrie while they divert Downtown Eastside music funding to former or current CUPE members, who is supervising Tetrault? Ethel Whitty, who has a record of deferring to CUPE members, even when they are involved in unprofessional criminal conduct toward Downtown Eastside residents.  Whitty has openly stated, "I have to support my staff."   What CUPE members want, CUPE members get.  And that includes retired CUPE members.
Posted by reliable sources at 5:20 PM 10 comments: Links to this post