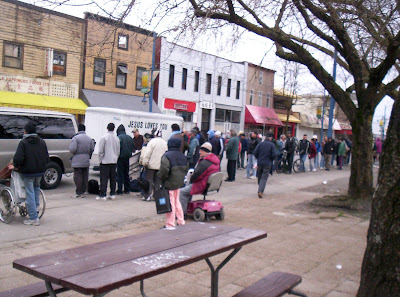 Today there was a sign in the lobby of the Carnegie Community Center announcing that the Squamish Nation would be hosting a traditional native feast of salmon, bannock, and two types of soup at Oppenheimer Park at 2 p.m. on March 16.

Several people left Carnegie and walked over to the park, arriving at 2:20 p.m., but didn't find any sign of a traditional native feast.

I figured there had been a mistake. But a middle aged aboriginal man saw it differently: "Somebody must have pulled a prank," he said calmly. "to make the Squamish Nation look bad."

Christians were there though, giving out soup from there slightly corny white van (see top photo) with words painted in black across the side: "Jesus Loves You". When I see that van around the neighborhood, it reminds me of a woman from Nova Scotia interviewed on Coast to Coast radio about a near death experience in which a figure of light told her, "Don't ever think you're not loved." 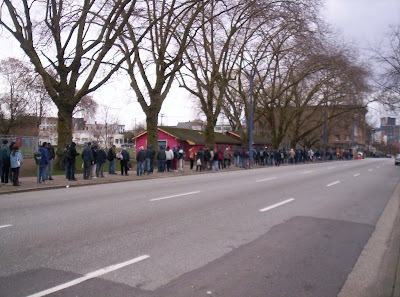 Posted by reliable sources at 9:08 PM No comments: