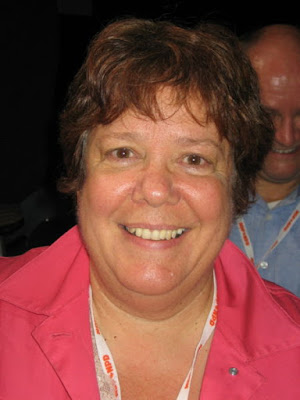 The Carnegie Newsletter, which receives annual donations from MP Libby Davies [NDP], continues it’s defamation campaign against William “Bill” Simpson, a homeless man who was elected to the Carnegie Board of Directors.

Carnegie members were surprised to see Carnegie Newsletter Editor, Paul Taylor, start off the New Year by once again publishing false commentary about Simpson. Just last summer, Taylor had been forced to print a retraction of what he acknowledged in writing was "libelous commentary" about Simpson in the Carnegie Newsletter. Carnegie members had also attempted to curb Taylor’s power at the Newsletter due to the libel targeting Simpson.

This month’s attack on Simpson in the Jan. 15, 2008 Carnegie Newsletter was muted compared to the attack in the Aug. 1, 2007 issue in which Taylor stated that Simpson had written “sadistic, lying attacks on various individuals,” that his "activities and writings . . . were criminal", and that he had used "fraud" as a means of getting elected to the Board.

Taylor began this month’s attack by reminding readers that William Simpson is the 15th Board member and is banned from the Center. “For the ban to be lifted, said individual must recognize that the behavior went against ‘conduct. . . in a civil and proper manner.’ To regain access an honest person agrees not to indulge in said anti-social activity again. Simpson apparently refuses to do so.”

When Taylor's accusation of "anti-social" behaviour was read out loud to Simpson, he chuckled for a moment and then shook his head. Simpson is still waiting to be given specifics that justified banning him from the Carnegie Center and Board meetings held there. The official reason he was given for the ban in a June 2007 letter from Jacquie Forbes-Roberts at the City, was that he operated a website that "features links" to the Downtown Eastside Enquirer blog which had run articles critical of Carnegie. Despite libeling DTES Enquirer bloggers in her letter with a zeal that could rival Taylor, Forbes-Roberts has never managed to come up with one specific example of content of the blog that would justify banning Simpson for linking to it. And neither has Carnegie Director, Ethel Whitty, who works under Forbes-Roberts' supervision.

Taylor seems to take lightly the destructiveness of the Carnegie Newsletter. In an article unrelated to Simpson on page 3 of the Jan. 15, 2008 issue, Taylor jokes that people have been “pissed” after being “featured in biased, insulting and crude coverage in Ye Old Carnegie Newsletter.”

And Libby Davies seems to also take lightly the destructiveness of the Carnegie Newsletter. When Davies received a written complaint from Carnegie member, Wilfred Reimer, about last summer's libeling of Simpson in the Newsletter, she responded in an email dated Oct. 29, 2007:

“I have always loved the Carnegie Newsletter and still do. I know you want me to, but I do not feel I can weigh in on this . . . .”

But Davies had already weighed in. Despite a bout of name calling by Taylor in the Dec. 15/06 issue -- "blog bozo", "slimy", a "blank", a "four year old spoiled brat pissing his pants", a "pest", a "neighborhood snitch", a "dismal excuse" -- Davies slapped down a $100 donation to the Carneige Newsletter in 2007. One hundred dollars carries a lot of weight at a newsletter that operates on a shoestring.

The City of Vancouver has also weighed in. It continues to provide the Carnegie Newsletter with free office space, electricity, telephones, and even a promotional link from the City of Vancouver official website. These perks are provided to the Carnegie Newsletter despite awareness on the part of Mayor Sam Sullivan and City Managers overseeing Carnegie, Ethel Whitty and Jacquie Forbes-Roberts, that it has been inciting hatred toward a homeless man and bloggers in the neighborhood -- to the point where bloggers are choosing to remain anonymous out of fear for their safety.

Even Carnegie Board member, Gena Thompson, appears to have weighed in. When Board member Rachel Davis, who has broken ranks by repeatedly raising alarms about the use of the Newsletter to defame Simpson, wrote to Thompson on Jan. 17, 2008 about Taylor's latest round of insults, she got a response the same day: "Sorry Rachel, this is exactly the type of e-mail I no longer have time for."
Posted by reliable sources at 2:29 PM 8 comments: 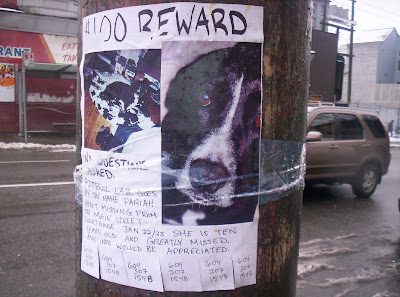 The dog on this poster, Pariah, shows up regularly with her owner at the Salvation Army truck which gives out free soup to the poor on Sunday and Tuesday nights. The soup truck arrives at roughly 10:15 p.m. and parks in front of the court house at Main & Powell St.
Last week, the dog disappeared.
One guy who regularly shows up at the soup line says he thinks somebody may have stolen the dog.
This dog, like many of the poor humans at the Soup Line, did not look like she was getting top-notch nourishment. But she didn't seem unhappy with her owner. People would give her attention and she would wag her tail.
The owner has plastered the Downtown Eastside with posters looking for Pariah. The phone number on the poster is 604-307-1548.
Posted by reliable sources at 12:46 PM 1 comment: