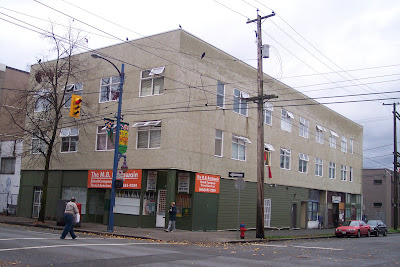 Photo: The former New Wings Hotel on Powell St. The entrance is at the side, on Dunlevy St. to the right of the photo. Photo taken Nov. 3/08

The “last man standing” after a shootout over drug turf at the New Wings Hotel on Vancouver’s Downtown Eastside in 2005 has been granted a new trial by the BC Court of Appeals. Three judges unanimously agreed that Justice Arne Silverman erred in instructing the jury on the issue of self-defense during a 2007 trial which saw Dennis Knibbs Jr. convicted of second degree murder.

Knibbs and Liscombe were a drug dealing duo at the New Wings Hotel at Powell & Dunlevy, across from Oppenheimer Park on the Downtown Eastside. Habib was also dealing drugs out of the New Wings. Liscombe believed Habib was infringing on his turf, “mowing his grass” as his former girlfriend Susan, a drug addict, put it at trial. Liscombe and Habib had already been a physical fight at the New Wings, a fight which the evidence suggests Knibbs helped break up.

After that fight, Habib sneaked a sawed off shotgun to the hotel, on the day he was killed actually. On that day Habib was laying low in the room of a friend when Liscombe began pushing on the door, attempting to force it open. Knibbs was standing behind Liscombe. That’s when Habib pulled the trigger. When the close range shotgun blast hit Liscombe, he stumbled into the room onto the bed where he lay groaning with his guts hanging out.

Knibbs whipped out a police-style baton and entered the room, whacking Habib a few times with it. He also pumped three bullets into Habib with a handgun. Then he used Habib’s own sawed off shot gun to finish him off, shooting Habib at a range close enough to leave a hole in his chest the size of a “silver dollar”, according to a paramedic. 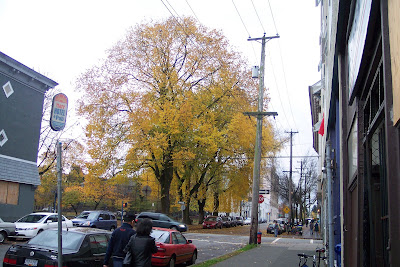 After this evidence was heard, the deliberating jury returned to the judge with a question about whether Habib had a legal right to fire that first shot or was that first shot to be considered a “wrongful act”?

The jury’s question was pivotal. If Habib hadn’t needed to go to the extreme of shooting a gun to defend himself, he could be seen as having provoked Knibbs with a ‘wrongful act”. Knibbs' response could then be seen as manslaughter.

Judge Silverman responded to the jury’s question by telling them to use “common sense”. But common sense is a standard looser than the law. That’s what Knibbs’ lawyer Glen Orris argued to Silverman at the time – I was in the courtroom – and it’s basically the position that the Appeals Court has since taken:

“I am concerned that the lack of focus in the judge’s guidance may have allowed the jury to apply a law of the jungle to the consideration of the questioned act”, Appeals Court Judge Ian Donald stated in a written decision. “That in the drug milieu, lethal force in self defense is justifiable regardless of the immediate circumstances.”

The first thing that ran through my mind when I heard that the Appeals Court had ordered a new trial was, “Will some of those drug addicted witnesses even be alive for a new trial?” There’s always the possibility of a plea bargain with Knibbs, who is now a year and a half into a 25 year sentence with no parole eligibility for ten years, settling for manslaughter. The last man standing could soon be walking.

On Halloween night, a Downtown Eastsider found a $100 dollar bill on the floor as he left the Regent Hotel. It was in the exit corridor. "It was crumpled up like trash", he said. So he picked it up and opened it. "It was a crisp new bill".

It was a nice bonus for the guy who has recently gotten off welfare and taken a job in a warehouse in Richmond for $11 an hour.
Posted by reliable sources at 12:56 PM 5 comments: Links to this post