Vancouver Community College Annual Post-Christmas Turkey Dinner Gets an A+ 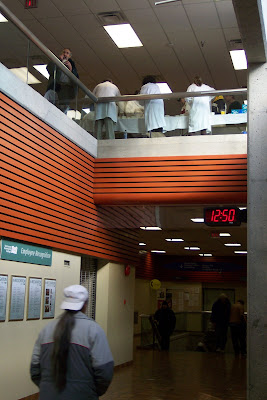 There was a long line-up on Saturday for the free turkey dinner cooked and served by students in the cooking, baking, and food service programs at Vancouver Community College, Pender St. campus. One man in the line said he'd never seen the line-up so long at the annual dinner. The line-up snaked from the first floor lobby, up the stairs, and around to the cafeteria area on the second floor. It went fast though. And students served fresh coffee -- cream and sugar if you wanted it -- to everyone in the line up.

Students and staff were super courteous, just like servers in expensive restaurants. 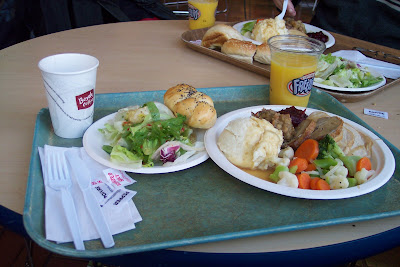 The only place where the crowd control broke down momentarily was in the cafeteria where the line forked into two as people picked up a salad and fresh-baked roll, and then merged again into one line as people picked up a plate of turkey and vegetables. One woman in the line called out to the people in front of her, “Don’t back up any more!”, as people stepped backwards to let others merge back into the line.
I thought the stuffing was the best part of the turkey dinner. It wasn't too salty and didn't have that out-of-a-box taste. There were bits of carrots and celery mixed in with the bread crumbs. I said to the friend sitting with me, "This stuffing tastes as good as if it were cooked inside the turkey." 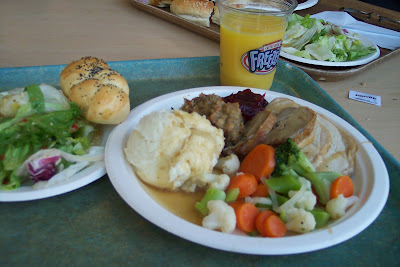 Everybody got a mixture of brown and white meat with gravy, mashed potatoes, and a steamed vegetable mix of carrots, brocolli, and cauliflower. The cranberry sauce tasted fresh-made and wasn't overly sweet. There was also a lettuce side salad with a tangy oil and vinegar dressing. 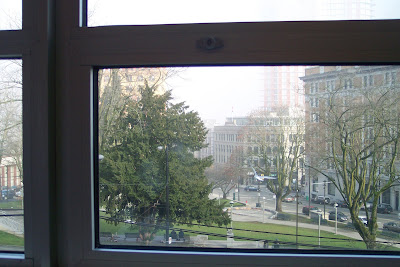 The free dinner came with a million dollar view. We sat in the "lower dining room" of the split level cafeteria, and had the above view of Victory Square.

You didn't have to be poor to attend the dinner but many people there were from the Downtown Eastside. It's the tail end of a five week welfare month -- cheques come out this Wednesday -- so even the most hardened Downtown Eastsiders were in a good mood as they got a free full course meal. And got treated like they had gold credit cards.
Posted by reliable sources at 6:30 PM 7 comments: Links to this post

Audrey Laferriere, who ran for Council on the homeless issue in last November's civic election, passed these photos of a new shelter in Vancouver along to the Downtown Eastside Enquirer. "It is a disgrace," in Laferriere's view, "that the aboriginal community has agreed to use this building/warehouse when Storyeum [in Gastown] is being used for storage."
Laferriere says the address being provided to the public for the shelter -- "201 Central at Western - near the Main St. Skytrain Station" -- is not accurate. "It is 420 Northern Street," according to Laferriere. I understand what she means about confusion over the address. When a friend pointed the new shelter out to me, I told him I didn't think that was the address I'd read in the paper. Laferriere hopes these photos will help people figure out where the shelter is located.
Laferriere also hopes the photos of the shelter will give the public an idea of the run down state it is in.
"My knowledge is that there are no toilets or showers or heat. Might be wrong", she wrote in her email to the DTES Enquirer.
According to Laferriere, $500,000 was provided for this shelter." The hours of operation of the shelter are from 8:00 at night to 10:00 am.

The shelter is near McDonald's restaurant at Main & Terminal and Science World which can be seen in the background of the above photo.
Mayor Robertson Making Progress
I have noticed in the last week or two that there are less people sleeping on the streets, which suggests that Mayor Gregor Robertson's HEAT team are getting something done.
I still see the occasional homeless person though. Last night when I walked a friend home at about 10:30 p.m., I noticed a woman with a shopping cart huddled at Columbia & Powell, beside Columbia St. housing. She was there a day or two earlier as well. Maybe she doesn't know that the First United Church-Mission shelter takes shopping carts.
Last night a homeless guy who brought his shopping cart into McDonald's restaurant on Main near Terminal was told to leave. He left yelling. Last week, he cut his hair and shaved in the eating area. That guy might go to a shelter if he knew the one at First United takes shopping carts.
Posted by reliable sources at 1:44 PM 1 comment: Links to this post