At a dance in the Carnegie theatre on Saturday night, a man helped himself to the butts of several women on the dance floor. He just started grabbing their butts.

Police came and he was handcuffed and arrested.

Nine women gave statements to police. At 2:30 a.m., some of them were still at the police station giving statements.
Posted by reliable sources at 9:43 PM 1 comment: Links to this post

Jail for Grandson of Medicare


Keifer Sutherland started his 48 day jail sentence for his third drunk driving conviction on Dec. 5th. Sutherland is known as the character, Jack Bauer, in the television series '24'. But Canadians know who he really is.

Keifer Sutherland was born to Shirley Douglas, the only biological child of Tommy Douglas. An actor herself, Shirley Douglas gave birth to Keifer and his twin sister, Rachel, when she was married to actor Donald Sutherland.

Keifer Sutherland is not the only star in the family. Tommy Douglas was voted "The Greatest Canadian" of all time in a televised contest hosted by the Canadian Broadcasting Corporation in 2004. And he had been dead for decades. 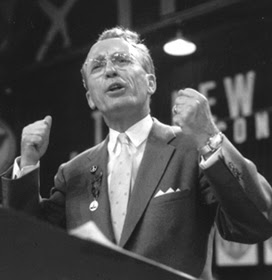 Douglas was known as a modest man. He wasn't above giving a speech standing in the back of a farmer's manure spreader, although he did joke that he was standing on the platform of the opposition. And he always took the position that if it wasn't for the hard-working grassroots people promoting him, he wouldn't be in the position he was in. Some of that was his Saskatchewan upbringing: in Saskatchewan, you never act like you're better than anybody else.

You can see that lack of snobbery in Keifer Sutherland. Autograph collector Michael Wehrmann told the New York Post newspaper that until his arrest, Sutherland had not snubbed people seeking autographs: "He was one of the best. He would always stand and sign for a half hour...."

It was when Sutherland's grandfather became leader of North America's first socialist government, the New Democratic Party government in Saskatchewan, that he pushed for a universal medicare program. As a child, Douglas had injured his leg and it would have been amputated if a doctor, who saw the condition as one his students could learn from, had agreed to give him free treatment. But that experience solidified Douglas' belief that health care was a right, not something that should be dependent on the generosity of others.

Douglas pushed for a Canada wide medicare program when he left provincial politics and became leader of the federal New Democratic Party, a party which claims to be committed to improving the lives of the working class. That was the class that famed Canadian writer Alice Munroe grew up in, and she says it wasn't all bad. Now in her 70's, Munroe says there was a freedom in growing up in the working class, not a lot of pressure about what you did with your life, as long as you stayed out of jail.
Posted by reliable sources at 10:48 AM No comments: Links to this post