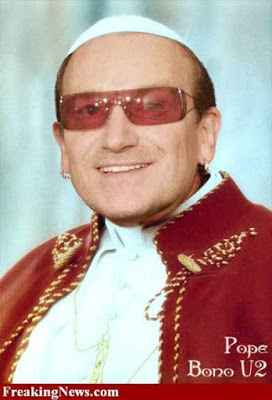 U2 is in Vancouver, playing GM Place tonight.
U2's lead singer, Bono, is probably as well known for trotting around the globe pushing a 'Make Poverty History" agenda
Rex Murphy, a CBC commentator and author, was being interviewed on CFUN radio earlier this week and mentioned Bono coming to Vancouver. Bono likes to go to gatherings of world leaders, Murphy said, and he likes to get his photo taken with any given world leader he is pressing to commit more money to making poverty history. Murphy pointed out that lately Bono has been insisting that the Irish government increase their contributions to the UNICEF children's fund, while he has moved his company from Ireland to Switzerland to avoid taxes.
Posted by reliable sources at 6:54 PM 4 comments: Links to this post