Like other Carnegie members, this woman knew how Carnegie member William Simpson had been treated when suspected of chatting with bloggers. On two occasions, he was chased across the gallery on the third floor of Carnegie into the stairwell by Board member, Bob Sarti, who repeatedly yelled, "Tattletale Queen of the Carnegie!" This happened twice. Then Simpson was banned from Carnegie entirely under pretenses that involved fraud. If she was going to be subjected to this type of backlash, she wanted to know in advance.

Guess what the woman is now experiencing? Retaliation. She says the retaliation began shortly after her story was published on the Downtown Eastside Enquirer.

Under the Whitty administration, staff, volunteers, Board members, and a number of regular users of Carnegie have been told not to speak to her. One longtime friend told the woman that she had been warned twice by two different people not to talk to her as anything said "will end up on the blog." The two friends still talk, but trust has been eroded.

The woman has been chased into the stairwell at Carnegie and yelled at -- sound familiar? -- by a guy who writes plays, according to witnesses who were having dinner at Carnegie this month. Witnesses say the playwright, whom they identify as one of Whitty's "pets", lives outside the Downtown Eastside but is paid to write plays in which he provides a 'voice' for Downtown Eastsiders. Like Whitty, he apparently has little tolerance for Downtown Eastsiders providing their own 'voice' by speaking to bloggers. According to witnesses, this playwright chased the woman into the stairwell and yelled "Blogger! Blogger! Blogger!" after her as she climbed the stairs.

I asked the woman to corroborate witnesses' account when I saw her at Quest food store last week. She remembers the incident and she remembers that the playwright seemed "wound up" But she couldn't make out what he was saying, recalling only that, "He was shouting one word over and over. It could have been 'blogger....I was almost at the top of the stairs before I stopped to see who he was yelling at." There was nobody else on the stairs or in the stairwell at the time, but she didn't know what was going on so she continued up the stairs.

The woman feels most harassed, she told me at Quest on Saturday, by the brazen breaches of confidentiality involved in the "leaks" from the Whitty regime that she was the focus of a "security" report. When you're banned from an area of Carnegie for alleged misconduct, the ban is supposed to be confidential, she explained. Only staff with access to the Carnegie Security log book and computer database are supposed to know about it. (It hasn't been bloggers who have breached confidentiality, as we did not publish this latest victim's name to avoid extending the defamation she had already been subjected to by Whitty, Tetrault, and Everall.) Come to think of it, the Carnegie Security log book and data base would be covered under BC's confidentiality legislation.

Whitty is blatantly classist in her breaches of confidentiality. She vigorously upholds the right to confidentiality of staff accused of misconduct, but she allows the names of low income people barred for alleged misconduct to be spread far and wide. This woman estimates that 50 people have now been told of her banning and that she is somebody to be wary of as she talks to bloggers. This information spread to povertarians as far away as the Learning Exchange in Chinatown. (More will be written on Whitty's breach of confidentiality as we collect more information on it.)

The woman says that Whitty has been breaching her confidentiality from late 2006 to the present, approaching one of her male neighbors on two occasions to discuss her, fish for information, ask him leading questions, and encourage him to "turn me in for things I didn't do." All of this was done on regular City work hours.

"Incitement of hatred" is what an advocate she spoke to calls this.

Posted by reliable sources at 9:20 PM 11 comments: Links to this post 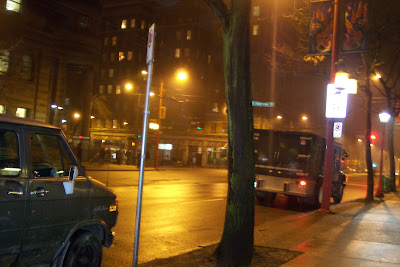 A homeless guy -- I didn't ask him if he was homeless but he looked frail and had lots of missing teeth so I assumed he was homeless -- was standing there and said, "Don't worry, I'll open it for you." He pulled a card out of his wallet, stuck it in the door and flicked the lock open.

I knew he would hit us up for spare change, and he did. But he wasn't aggressive. As I walked north on Main St., he walked alongside me, chatting.

Suddenly, three armed men came toward us. One said "Excuse me, GET MOVING!!" I realized then that these guys had pulled up in an armoured car (on the right of photo above) and were entering the Royal Bank, presumably to pick up money. Now they owned the sidewalk.

We had been sauntering along and it would have been obvious to the guard that we would be past the Royal Bank in less than a minute.

I told the homelss guy that I felt like telling that guard that this sidewalk was public space. The homeless guy told me not to say anything, "They've got guns." I retorted, "I'm going to go back and take their picture when they come out." "NOOO!", he responded, "They've got guns!" I took a picture of their vehicle, but I stayed well back. They came out of the building about five minutes after verbally abusing us. 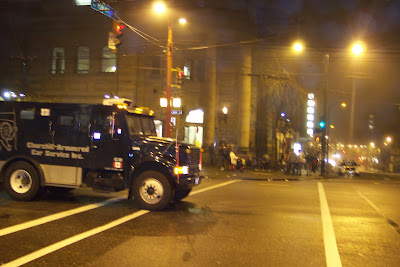 Churchill Armoured Car service passes Carnegie Center after picking up bags at RBC across the street.

I thought of the Pivot Legal Society report, "Security before Justice", that has just come out on the problem of homeless people being removed from public spaces by private security. Pivot's Laura Track told the media "They're limiting people's access to public space and relocating the homeless..." I also recall Track telling the media that this discrimination is often based on a person having the 'appearance' of being poor.
Although I would like to see Pivot criticize civil liberties abuses by publicly-funded security guards as much as they do private security, I can see what they mean about, "Security before Justice" in public spaces.
My mood was wrecked for an hour after being told to "GET MOVING!!".
Posted by reliable sources at 2:10 PM 2 comments: Links to this post

There was a native smudge today in the Carnegie theater. Something was being burned, sage or sweet grass or something, but ventilation had clearly not been taken into consideration in the planning.

The 'cultural sharing' programme is run by a white woman, Diane, and a native man, at least the last time I looked.

When I dropped into the building at 11:50 a.m., the air was filled with smoke. I thought the smoke would just be on the first floor where the theater is located. But as I walked up the stairs, I couldn't breathe normally; it was like I couldn't get enough oxygen. I was trying to decide whether I should go back downstairs or keep going up. I got to the back of the third floor where the air was better, probably because the computer room nearby has it's own ventilation system. My lungs are normal, but there are occasionally people in Carnegie who are on ventilators or have health problems.

But you can't say anything about not being able to breathe because political correctness is as thick as smoke in the air. You're supposed to be grateful that you're even allowed into Carnegie as it is on "Coast Salish land". At the All Candidates meeting held at Carnegie prior to the civic election this month, an organizer from the Downtown Eastside Neighborhood House thanked the Coast Salish people as this even was taking place on their land. And candidate Andrea Reimer piped up to say she was glad that fact was acknowledged.

A further note on cultural sharing: natives who have made their way into the establishment at Carnegie, like Stephen Lytton and Marlene Trick George, are 'thick as thieves' with the white people operating it as a site where the poor are routinely denigrated and denied basic civil liberties. Some of the worst abuses have taken place in the Seniors Center where the supervisor is native activist and Carnegie staff person Marlene George. Stephen Lytton is a Carnegie Board member and after listening to public concerns about an elected Board member being blocked from entering the building for Board meetings, he suggested they allow "the man" back in. Other Board members ignored Lytton and he has never spoken out again on the issue.
Posted by reliable sources at 11:57 AM No comments: Links to this post