Woman Reportedly Tied Up and Thrown Out Window of Cobalt Hotel 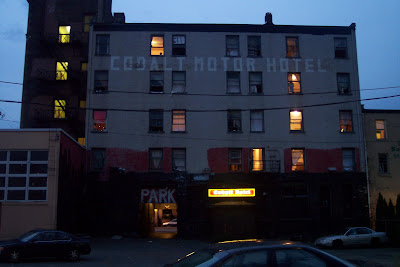 A man who has for years lived on the fourth floor of the Cobalt -- his window is in the top row of windows in the photo above taken from the back of the Cobalt -- says the word is that a woman was tied up and thrown out a fourth floor window. The man, who mentioned the incident while having coffee with friends at Carnegie on Monday, says it happened just a few doors down from his room.

"There were detectives around so I knew something had happened," he said. Police came to his door and asked if he had heard "anything unusual". He had been sitting in his room wearing earphones and told them he hadn't heard anything.

Later he remembered something though. He had "heard a cat screaming like somebody was trying to kill it". So he had looked out his door and a cat came out of a room down the hall and seemed ok.

He thinks the woman who supposedly died was in her thirties with red hair. He had the impression that she hadn't been getting along with other residents of the building, although he doesn't mix much with the other residents because he is not into drugs (just beer). The residents, some of whom move into the Cobalt straight out of jail, had allegedly been fighting over drugs. The word is that the woman had "ripped somebody off" for drugs but he doubts that's true because, "she wouldn't have come back to the building."

He had seen the woman on a previous occasion lying in the hallway with the paramedics over her.
Posted by reliable sources at 10:27 AM 1 comment: Links to this post