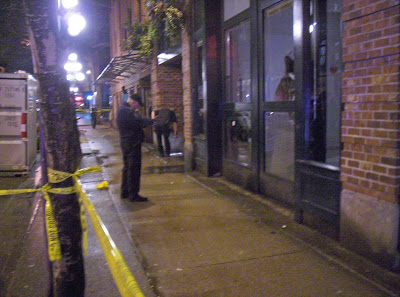 Photo: police officers collecting evidence at crime scene immediately following the shooting
The man shot and killed at Hastings & Carrall St. on Friday night has been identified as 40 year old Earl Steve Seymour. He was from originally from Glace Bay, Nova Scotia but then moved to Bible Hill, Nova Scotia. In recent years, he had been living in Vancouver. He was known to police, according to VPD spokesperson Jana McGuinness.

Further details of the murder have now surfaced. The suspect reportedly arrived in a car, parked at Pigeon Park, and then walked across the street to a parked minivan in which Seymour sat with a woman.

Upon reaching the van, CBC reports, the suspect said, "The war is on."

"Turtle" McDonald, a witness, says the victim "jumped out of the driver's seat because there was nowhere for him to go." He jumped across the hood of his minivan but by the time he managed to do so, he had taken four or five shots to the head.

After firing a total of six or seven shots, the suspect ran west, on foot, down the alley in the direction of the Army & Navy store and the Cambie Hotel Hostel.
Posted by reliable sources at 2:04 AM No comments: Links to this post