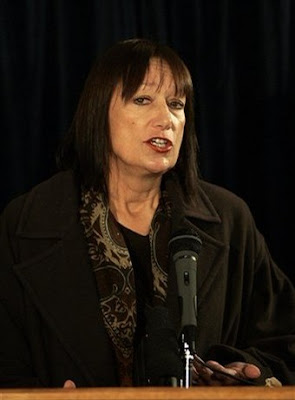 I heard Ujal Dosanjh interviewed on CKNW radio yesterday morning about today's Vaisakhi parade in Surrey, the one he was advised not to show up at as his safety couldn't be guaranteed.

Dosanjh was giddy during the interview; he giggled several times -- odd, since the topic was violence -- and at other times he was busy portraying himself as an upright man. The interviewer never once giggled.

I laughed out loud when Dosanjh told the interviewer: "I'm a very proud man." That's funny, the evidence points more toward him being a con man.

I used to live with a woman who did some work at Battered Women's Support Services in Vancouver when Dosanjh was BC Attorney General. Dosanjh was hardly an upright guy; he had a 'You scratch my back and I'll scratch yours' relationship to BWSS. He funded BWSS and they gave him an election endorsement to their entire newsletter mailing list. I doubt that he included that endorsement in his election campaign costs. While he was funding BWSS, the top dyke there -- the one who put out their newsletter -- discussed in the newsletter how she had been sent to a conference in Texas where she sat in a hot tub.

But here's why I would never vote for Dosanjh.

While Dosanjh was throwing money at BWSS, there was evidence that men were being fast-tracked to "batterer" status there. Here's just one example: A guy's common law wife told him she was leaving him so he stopped buying her monthly carton of cigarrettes, which earned him the label "economic batterer" at BWSS, a label eventually abbreviated to "batterer". Even the common law wife in that case apparently questioned whether he was a batterer and said her psychiatrist, whom she was seeing for agoraphobia, told her she wasn't a battered woman. But the label "batterer" was used liberally at BWSS. If a man called to challenge these labels, he was at high risk of being labelled a "harasser" -- a catch-all label that they reportedly used relentlessly.

This labeling mattered because BWSS had an office at the court house and they threw their weight around in court cases, including child custody battles.

One of the top women in the BWSS "collective" was a lesbian who didn't like men and wasn't a big fan of heterosexual women either, and to go anywhere in that organization....well, let's just say your career opportunities improved once you switched to lesbianism.

Anyway, a few men and women began to demand that BWSS be held to a higher standard. Even a psychological governing body was critical of BWSS. But one woman involved in BWSS, said that if you spoke up about anything, staff could tell you to take your medication, that sort of thing -- crazybaiting is a predictable tactic used against whistleblowers. When it came to imposing standards, Ujal Dosanjh, was not proud enough to do it. He ignored complaints from both men and women.

Dosanjh would sometimes refer complaints to Suzanne Dahlin, a highly paid bureaucrat in Victoria who ran Victims Services, part of the Attorney General's office. (I have looked Dahlin up: she is aboriginal and worked on land claims.) One woman said she was talking to Dahlin on the telephone and she could hear Dahlin typing, clickity click, clickity click, on her keyboard, and then Dahlin suddenly interrupted her, snarling, "Are you finished?" The woman asked Dahlin if she had even been listening. And Dahlin banged the phone down in her ear.

Dosanjh was asked at that point to do something about Dahlin's abuse. He replied with a letter stating that her behaviour had been "exemplary". (I previously saw a copy of the letter but I've emailed the recipient to get her to send me a copy.)

Dosanjh' ability to just gloss over reality showed up in the CKNW interview too, when he said he had not had to fear violence in British Columbia, that violence had not been a problem for him. I thought, "Huh?" He had his skull cracked when a Sikh extremist waited for him when he left his office and whacked him across the head with a steel pipe. The interviewer reminded him of that fact.

Battered Women's Support Services was never intended to be what it became under Dosanjh. It was intended to be for women who were physically abused or being physically threatened, not for smearing non-violent men and disadvantaging them in custody battles. The most man-hating lesbian who worked at BWSS has since left. The place may have been cleaned up now that she and Dosanjh are gone. I don't know because I no longer know anybody on the inside there.

It's time Iggy looked closely at past behaviour that Dosanjh should be ashamed of.

Posted by reliable sources at 7:35 PM 2 comments: Links to this post