I am Mark Steyn 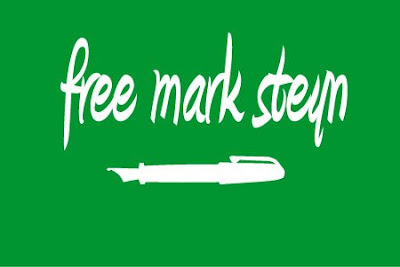 The blogosphere is abuzz over the protest planned for Monday outside the B.C. Human Rights Tribunal in downtown Vancouver. The Tribunal is holding what truepeers, a blogger at the Vancouver blog Covenant Zone, calls a “Stalinist Show Trial” for author Mark Steyn. But Steyn's rights are everybody's rights. Hence slogans like, "I am Mark Steyn" or "We are all Mark Steyn."

The B.C. Human Rights Tribunal has scheduled a hearing for Steyn, a Canadian-born newspaper columnist living in New Hampshire, and MacLeans magazine on Monday. Both are accused of hate speech based on an excerpt published in MacLeans from Steyn's best-selling book, America Alone. One of the complainants is Dr. Mohammed Elmasry, president of The Canadian Islamic Congress who pushed for sharia law in Ontario.

But Mark Steyn is not alone, says dag, one of several bloggers at Covenant Zone -- he also writes at No Dhimmitude -- who is organizing the protest in support of Steyn as his trial kicks off. "His right to express opinions is on trial", says dag. The protest will be held at 8 a.m. on Monday, June 2 in front of the Provincial Court House at 800 Hornby where, according to the BCHRT website, the hearing will take place.
The Steyn hearing is not the first time Human Rights Commissions or Tribunals in Canada have acted as “thought police” on behalf of Islamic Imams. Ezra Levant, former publisher of the Western Standard, has been forced to appear in front of the Alberta Human Rights Commission for publishing material that a Saudi-trained Islamic Imam has complained about. Levant has pointed out that when complainants don’t have a leg to stand on in the real courts, they take their case to a Human Rights Commission.
How did Human Rights Commissions get the power to harass authors and publishers? They were founded as an inexpensive way to handle disputes between landlords and tenants or employers and employees, cases in which discrimination was being alleged. Now they've become a tool for Islamic Imams to curb the free speech of infidels.

If you think Human Rights Commissions care about free speech, listen to the words of Dean Steacy, the primary internet "anti-hate" investigator for the Canadian Human Rights Commission. When questioned by Barbara Kulaszka, a lawyer for a website owner in a human rights case, Steacy said, "Freedom of speech is an American concept, so I don't give it any value.”

Prime Minister Stephen Harper has become a bad guy here too. It was pointed out on Covenant Zone, a generally pro-Harper blog, that before becoming Prime Minister, Harper called Human Rights Commissions in Canada “totalitarian”. But since then, he has angered his supporters by failing to reign in these publicly-funded “thought police”.

Not only Prime Minister Harper but the average Canadian has done little to rescue their right to free speech from Human Rights Commissions/Tribunals. According to Ottawa Citizen columnist David Warren, most of the donations to Mark Steyn's defense have come from Americans.

On Monday, though, Canadians will be speaking out about free speech erosion by Human Rights Commissions and Tribunals. That's obvious from the 80 comments left on the Covenant Zone post about the planned protest. As dag says, “I’m getting really excited about it.”
Posted by reliable sources at 3:21 PM 3 comments: