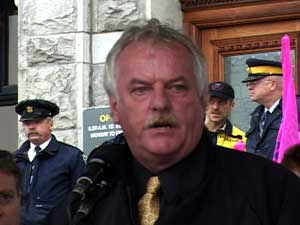 
A former secretary to two CUPE Presidents says she'll cross CUPE picket lines. CUPE, she says, expects rights and benefits for their members that they have denied their own secretaries. In Dec. 2002, CUPE arranged for Vancouver Police Constables Megan Herrmann and Kevin Ng to telephone and visit her at her home to demand that she muzzle herself about unfair labour practices inside CUPE.

The whistle blowing secretary, who will be identified here by her initials “R.M.”, had exposed CUPE for allegedly operating a "non-union sweatshop". She claims she saw two female co-workers fired after speaking up about issues such as an excessive workload, verbal abuse, and the reneging on a promise to provide a pension plan. She saw a third woman, a long time bookkeeper at Local 116, fired after she got cancer and became less efficient.

This scandal, says the former secretary who left CUPE with two glowing letters of reference, goes right to the top of the CUPE hierarchy. When she obtained a copy of the police report dated Dec. 17, 2002, she discovered that as "evidence", police had been given a copy of a letter she had sent to Barry O'Neill, President of CUPE - British Columbia Division, and a similar one she had sent to Jim Sinclair, President of the BC Federation of Labour. The polite letters outlined unfair labour practices to which secretaries working inside the non-unionized office of CUPE Local 116 had been subjected. The message was clear from the filing of these letters in the Police Property Office, she says: "CUPE and the BC Fed believe that a woman speaking up about working conditions is committing a crime."

The secretary asked both O'Neill and Sinclair in writing in 2003 to have these letters removed from the VPD Property Office. Speaking up about working conditions is not a crime, she reminded them. Neither O'Neill or Sinclair had the letters removed. Never once did either of these leaders ever speak to the secretary about this situation.

The whistleblowing secretary appealed to the Vancouver Police to expunge the notation of "Workplace Harassment" adjacent to her name on the police computer as a result of the CUPE complaint. Speaking up about unfair labour practices is a right, not workplace harassment, she pointed out, and in her case she had not even visited or telephoned Local 116 since leaving her job there. (The VPD does not even have jurisdiction at UBC. The RCMP does.) The VPD responded in writing that such notations remain on record for "99 years", even in cases such as hers in which the accused has been completely cleared.

The whistleblowing secretary also discovered from the police report that Ian Aikenhead, a former NDP President and CUPE lawyer, had provided information, albeit misleading, to police. It was information that was in his possession as a result of his wife, Catherine Aikenhead, being an NDP-appointed public representive to a dental regulatory College years earlier. He resorted to exaggeration and misrepresentation in an attempt to present her as a complainer to police, she says, "because he knew that CUPE did not have the facts on their side."

Indeed there is evidence that CUPE did not have the facts on their side. Other secretaries from Local 116 had previously taken coplaints to higher ups at CUPE. S.A., a woman who had put in 12 years as a secretary at Local 116, S.A., had spoken to Joe, a Regional Representative, after she was fired. He would not discuss the issue and simply told her to "Get a lawyer". She sued for the pension she claimed she had been promised. When another secretary, S.K., was fired after speaking up about excessive workload and being expected to absorb verbal abuse, she too took her case up the CUPE hierarchy. The Local 116 President and Vice President were summoned to the Burnaby office of CUPE to explain themselves. When S.K telephoned several members of Local 116 to request permission to attend the next union meeting to appeal the firing directly to the membership, CUPE sent her a letter ordering her to 'cease and desist' or she would lose overtime pay accumulated. Even the whistleblowing secretary says her pay stubs and other records can be used to verify her claims that she worked for long periods without benefits that every CUPE member enjoys.

It is not just top union leaders, though, who have acted in a manner which indicates that the tactics used against the whistleblowing secretary are within their comfort zone. In 2003, CUPE Locals in Vancouver -- including those currently on strike -- and the surrounding area were notified in writing of human rights issues raised by this case and asked to ensure that CUPE leaders resolved them. What did they do? Nothing.

A steamfitter gets muzzled by CUPE BC, under Barry O'Neill's administration

The secretary was not the only whistleblower CUPE Local 116 and CUPE BC played rough with. They had successfully muzzled a whistle blowing steam fitter just months earlier in a case that led to accusations against CUPE BC of practicing political psychiatry. The steam fitter,"S.J.", had worked for years in Plant Operations at the University of BC and was a dues-paying member of CUPE Local 116 (unlike the whistle blowing secretary who was directly employed by CUPE Local 116.)

The steam fitter got on the wrong side of CUPE when he was briefly off work on compensation. Compensation cheques were issued through the union office and the steam fitter claimed that he and others receiving cheques were being shortchanged. He did the math and took the figures to CUPE. He was ignored. But he persisted. He received a cheque for $1,500 in the mail, the amount he had claimed he was shortchanged, but CUPE wouldn’t tell him what the cheque was for. He didn’t shut up. He sent a letter to CUPE pressing them on this issue and, this being just after 9/11, he wrote, "God Bless America" at the bottom of the letter. "A week later," he says, "a cheque for $640 came through the door." The steamfitter says that the cheques were issued to him through the Back to Work office on the UBC campus which was run by Colleen Garbe, a member of the CUPE Local 116 Executive.

The steamfitter also spoke to CUPE BC and CUPE National. Just as the steam fitter was considering going to the RCMP to request an investigation, CUPE called the RCMP on him.

Leaders at CUPE Local 116 told the RCMP that the steam fitter had made a death threat against CUPE Vice President Paul Cooke. The steam fitter, an immigrant from Scotland, and Cooke, an immigrant from Ireland, worked together in Plant Operations and knew each other well. The pipe fitter claims that he had a few beers and sent Cooke an e-mail about the compensation cheque issue, telling him at one point, ‘I should take you out’. This expression, the steam fitter explained, is heard in pub culture in Britain; it means that the two of us should go outside and settle this with our fists. The RCMP spoke to the steam fitter. No charges were laid.

But CUPE was turning up the heat on the steam fitter. They sent a lawyer from their Burnaby headquarters to a meeting arranged with the steamfitter at UBC. She was “tough” the steam fitter said of the lawyer. She informed him that he would have to submit to a psychiatric assessment and take medication in order to keep his job. The steamfitter did not have a lawyer at the meeting and, wanting to keep his job, he succumbed.

CUPE ruined his chances of ever getting a promotion, he believes. When he later applied for better jobs in the workplace, he found he was being ignored.

The whistleblowing secretary knows the steam fitter but neither knew of one another’s problems with CUPE as they were occurring. The workplace harassment and psych record the steam fitter acquired will be attached to his name on the police computer system for life. Just as a similar smear* is going to remain on the whistleblowing secretary's record for life; the last she heard it would be "99 years".

If I encounter a CUPE picket line, the secretary says, I'll cross it and I'll tell them why. If they try to convince me to support their right to struggle for better working lives, I'll say, "Talk to me in 99 years."


*A year after the case of "WORKPLACE HARASSMENT" was closed by the VPD, the alleged offence for which she was investigated was fraudulently altered in police records. This occurred after the secretary told O'Neill and Sinclair in writing that as long as the WORKPLACE HARASSMENT notation remained on her record, she intended to ensure that it remained on their public record. She cannot prove that labor leaders had any involvement in the retroactive change to CUPE's police complaint. For more information see post, "Evidence Tampering in CUPE Police Complaint".
Posted by reliable sources at 6:52 PM No comments: