Traffic Lights Down and No Cops Around 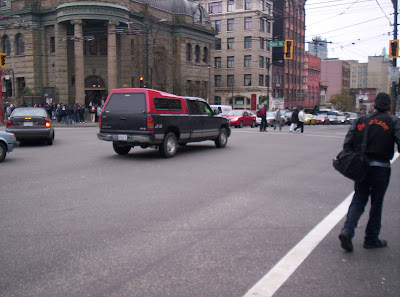 All traffic lights were stuck on red at the busy Main and Hastings intersection during rush hour this afternoon. I first got a report at about 3:30 p.m, another report at 4:00 p.m., and another at 4:45 p.m. that the lights were still down. They started functioning again shortly before 5 p.m.

There were no Vancouver Police on the scene the entire time. At around 4 p.m., one police officer drove by in a squad car, turning toward the police station just around the corner on Main. He didn't seem concerned about the mayhem. "Shift change," said a bystander.

Multiple lanes of cars were headed in the direction of pedestrians walking in the crosswalks. One woman with her baby in a stroller was talking to a male friend on her left, not realizing that three cars were coming at her from her right. The drivers did see her and slowed as she suddenly saw them and darted to the safety of the sidwalk.

The drivers were actually quite courteous. The fact that they were crossing against red lights may have made them more willing to yield to pedestrians.
A Downtown Eastside resident sent us the above photo.

Where were the police?
Posted by reliable sources at 4:19 PM 3 comments: