Is This Your Son? Come and Get Him. 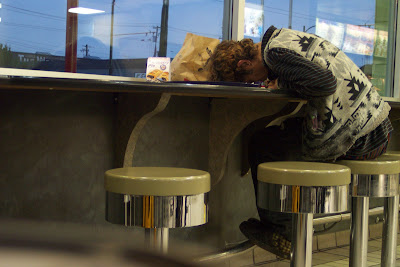 A manager of McDonald's restaurant at Terminal & Main says he picks up two or three needles a day left by drug users. The manager was chatting with a customer who had asked him to pick up a needle that the above heroin user had just dropped on the floor. The manager fetched a plastic red and yellow "Bio-hazard" box and a pair of tongs from the back of the restaurant and picked up the needle.

McDonald's also picks up the expense for this. The manager said that it is the responsibility of McDonald's to drop off the used needles at a depot downtown.

The young guy in the photo above had come into McDonald's restaurant at Terminal & Main with his skateboard on Friday evening, October 24. That McDonald's is a popular spot for Downtown Eastsiders to have coffee. It appeared that this young guy was on heroin. There's a reason heroin is referred to as "down"; people on it seem really calmed down, moving in slow motion. 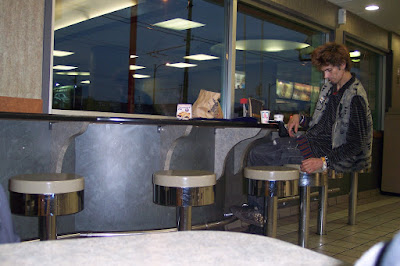 This heroin-skateboarder would kind of nod out and lean on the table, then in slow motion he would lean backwards on his stool to the point where we thought he would topple, then he would sit up. A few minutes later, he would do the same thing again. The manager approached the guy twice during this performance and politely instructed him to pack up his stuff and leave. A customer sitting adjacent to me took out a camera and snapped the photos posted here.

Eventually the guy on heroin crouched on the floor by his stool for at least five minutes, with customers watching and saying things like, "Sad". Finally, he stood up and a needle dropped out of his pocket onto the floor. The needle had no cap. A customer said, "I'm going to tell the manager; there are kids in here."

What became of the guy on heroin? He was back last night at McDonald's. It was again Friday, this time Halloween. He was again moving in slow motion. A different manager attempted to reason with him, to get him to leave. But he wanted to purchase some food and the manager eventually allowed him to do that. He went to the counter and was slowly trying to get his money out of a large black wallet attached to his pants with a chain. I left.
Posted by reliable sources at 6:32 PM 4 comments: Links to this post