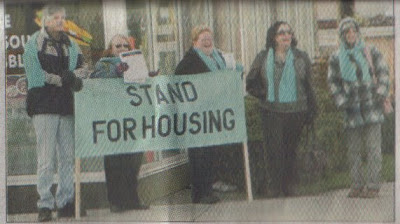 Can’t people think of a color other than blue for a scarf? I thought the Blue Scarves were conservatives who meet at the Vancouver Public Library on Thursday evenings to discuss the threat to modernity by Islamo-fascism. But now people on the political Left are wearing blue scarves too, as they stand on Vancouver street corners to demand social housing.

Blue Scarf Housing “STANDS” are the latest action by the Citywide Housing Coalition, a group started by the Carnegie Community Action Project [CCAP] in 2007 to ensure that governments keep promises to make affordable housing a legacy of the 2010 Winter Olympics in Vancouver.

Every Saturday people wearing blue scarves and holding blue banners meet for an hour between 1 and 2 p.m. on street corners in Vancouver. They are there to demand that City Council protect Vancouver renters from having their homes converted to condos and that federal and provincial governments restore programs that built permanent social housing for low and moderate income people. They also want welfare rates raised and barriers to getting on welfare removed. “We believe that these changes are the primary means of ending homelessness in our city and beyond”, Wendy Pederson, a full time paid CCAP organizer, wrote in the April 1st Carnegie Newsletter. 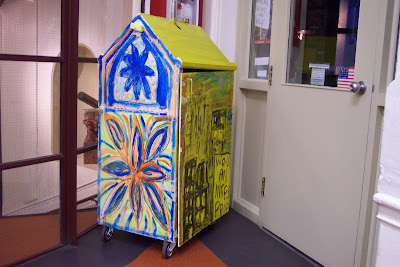 (Photo above: A mini house used as a prop for the STANDS sits outside the door of the CCAP office inside Carnegie Center.)
The idea for STANDS came from the Mothers of the Plaza de Mayo whose children were “disappeared” by the military from 1976 to 1983. “They stood every week in a city square wearing white scarves until the generals capitulated”, Pederson wrote. “The scarves became an international symbol for protests against unjust and inhumane governments.”

Street corners with stands so far are:

If you show up to stand with the social housing advocates on the street corner, you will get a blue scarf handed to you. If you show up to meet with the conservatives at the Vancouver Public Library, you have to bring your own scarf. That points to a fundamental difference in the outlook of the two Blue Scarf groups.

Posted by reliable sources at 3:49 PM 15 comments: Links to this post