Last week, the Vancouver Sun ran a "local girl makes good" story about Lisa Stevens, a Vancouver-born choreographer who has made an international name for herself. Stevens has recently choreographed High School Musical, which was picked up by Disney. The Sun reporter noted that Lisa "is looking forward to taking family and friends to one of the Vancouver performances".

Not her sister Anita Stevens, I bet.

Anita Stevens, Lisa's older sister and only sibling, ended up on the Downtown Eastside where the family member who didn't make good so often ends up. Anita looks exactly like the high school graduation photo the Sun ran of her Lisa, dark curly hair, fine features.

Anita rarely talked about her family but she did say that her parents had told her that if she ever showed up at their house again, they would call the police and have her arrested.

Anita mentioned that her mother had wanted both her daughters to be artistic but she had been more of a bookish type. She had studied Archeology at Simon Fraser University. She could play the piano well though, and would sometimes play the one in the Carnegie theatre.

Like many people on the Downtown Eastside, Anita ended up on the Disability welfare rate, not the Disney payroll.

You could tell Anita had been raised middle class; she was always a little better dressed than most people on the Downtown Eastside. She was beautiful and men often wanted sex with her, until they discovered she was cracked -- and even then some wanted sex with her.

Years ago, Anita mentioned that her sister was a "much in demand" choreographer and that she had her own dance school. "She said it was called the 'Lisa Stevens School of Dance' or something like that," a Downtown Eastside resident recalls.
Lisa had begun dancing at the age of five at Vancouver's Jewish Community Center, according to the Jewish Independent newspaper. The Jewish community appears quite enamored of their native daughter. But they weren't so enamored of her father, who had converted to Judaism when marrying her mother; he never felt the Jewish community totally accepted him, Anita once said.

Despite Lisa's hectic life according to the Sun article, she often returns to Vancouver, sometimes visiting with her old friend Perry Ehrlich at the Jewish Community Centre's summer program, Gotta Sing! Gotta Dance!

Anita once mentioned that her sister was getting married and that she was not invited to the wedding.

Anita didn't say why she was not invited to the wedding. She didn't have to. Downtown Eastsiders knew that she could be unpredictable, she could cause a scene.
Don't get me wrong, nobody on the Downtown Eastside blames the family. Anita was at least 40 years old when much of this was going on and the family may have earlier tried to help her and become exhausted.
They wouldn't be the only ones. When Anita's mental health was in an unusual downward spiral and she didn't have a place to live, Bob Sarti and Muggs Sigurdson who were involved in the operations of the Carnegie Community Center, let her stay at their Strathcona house. But they had to move her out a short time later; the story was that she had become a fire risk. During the same period she had reportedly started a fire in the lobby of a housing co-op in the Chinatown/Strathcona area where she was staying and got herself booted out.

Anita eventually got her medication changed and stabilized. But a side effect of the medication was weight gain. She was still beautiful, just a ballooned up version. She then got into a social housing apartment building up Kingsway and didn't come to Carnegie or the Downtown Eastside much after that. She said it was too far to travel.

Anita did continue to occasionally submit material to the Carnegie newsletter. She had a long history of submitting poems -- she was a member of the Downtown Eastside Poets years ago -- and commentary. In one of the last pieces she submitted, she advised that the cure for what ails you is lots of sex.

Gotta sing, gotta dance, gotta do what you gotta do.
Posted by reliable sources at 4:17 PM 11 comments: Links to this post

The Comaraderie of Cab Drivers 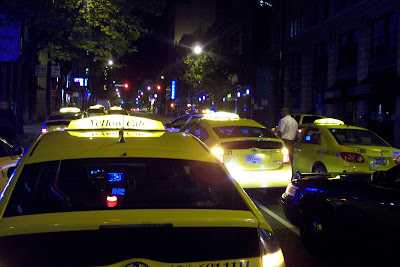 This morning at 1 a.m., a few cabs pulled up on Richards St. beside Waves Coffee Shop at Richards and Hastings. A few guys jumped out and there was some pushing and shoving. I dug for my camera but by the time I got it, the commotion had ended. Uniformed police arrived immediately and grabbed one guy and handcuffed him. He didn't resist. There were undercover cops standing around too; they may have been there earlier. 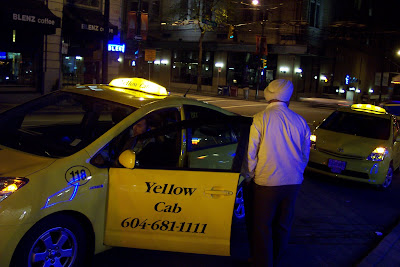 A cab driver with a white turban walked over to another cab in which the driver was sitting behind the wheel writing a statement for police. I asked the guy with the turban what had happened and he said the guy writing the statement had been assaulted. He asked me if I had caught any of the action on camera. 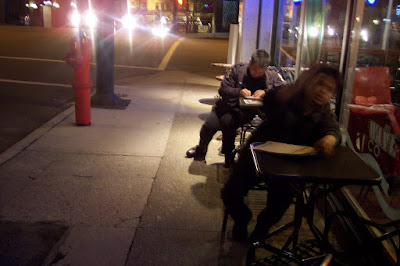 Another cab driver was sitting at an outdoor table at Waves Coffee Shop writing a statement while a police officer sat at another table writing a report. (see photo above). I asked the cab driver if someone had been assaulted. He said no, that a guy had "damaged my car", and pointed to a large dent on the hood of his cab. He appeared angry. A police officer was examining the dent.
What amazed me about this event was how many cabs immediately showed up to help a fellow cab driver in distress. At least 7 cab drivers showed up to help an 8th cab driver. It was like a tribe of yellow cabs blocking Richards St.
Posted by reliable sources at 2:19 PM 3 comments: Links to this post