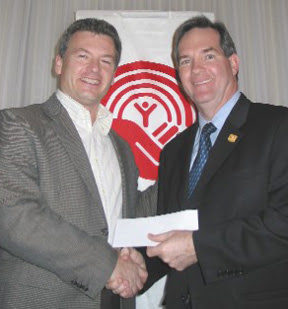 At breakfast Thursday, United Way of the Lower Mainland President, Michael McKnight, did not utter a word about criminal allegations swirling around United Way. He was speaking to over 1,000 people on at the United Way breakfast awards ceremony at the Westin Bayshore Hotel. The early morning breakfast was to recognize the 5,000 volunteers, 56,000 donors, and 1,100 workplaces involved in last fall’s United Way fundraising campaign.

McKnight may not be solely to blame for the shortfall though. For one thing, he inherited baggage from former United Way CEO, Ron Dumouchelle. Dumouchelle left United Way shortly after a woman surfaced documented evidence of persistent fraud in a police report written when Dumouchelle lodged a complaint against her with the Vancouver Police. Dumouchelle lodged the complaint in an apparent attempt to stop her from making a Report on United Way available to donors. Dumouchelle stated in an internal document that if donors got even “a whiff” of scandal, it could reduce donations.

On the first page of the police report, major United Way donors were named as witnesses in the case: Canada Safeway, Revenue Canada, Canadian Red Cross, Canada Post, Westminster Savings, even the President of the Toronto Dominion Bank. But woman calls this an exercise in “public mischief”, claiming that there was never any evidence of criminal conduct on her part. Indeed Constable St. Amant wrote in his report that he and Dumouchelle agreed that this was “not a criminal matter.”

When having the woman treated like a criminal failed and she invoked her right to remain silent, a new tactic was employed against the woman. She was targeted for a VPD “Car 87” psychiatric visit under what she alleges – and the paper trail lends support to her allegations — were fraudulent pretenses. This tactic led to accusations of “political psychiatry” by Canadians Opposing Political Psychiatry. Although Dumouchelle left United Way — no reason given publicly — these allegations didn’t leave with him.

This case of alleged fraudulent evidence and political psychiatry dates back to Dec. 2002 — but what a difference five years makes. Now that anybody can publish on internet news sites, this story finally caught up with United Way during their fall 2007 fund raising campaign.

But it gets worse: Kelly has knowingly concealed from parents the fact that the VSB’s failure to take responsibility for it’s employment of political psychiatry has resulted in a global boycott of Vancouver School Board high school diplomas. A victim of VSB political psychiatry caught up with Kelly during the campaign and requested his resignation as a United Way Board member. Not the best guy for United Way to be promoting as a “visionary” on their website.

And then there was the embarrassing interview given to the Vancouver Sun during the United Way Campaign by an earnest middle class man and his equally earnest wife. The man said he used to be a loyal supporter of United Way -- until his mother left United Way some money in her will. When an issue regarding the will came up, he was hurt by how quickly United Way sicced their lawyers on him. He's finished giving to United Way, he said. He and his wife now give only to charities with no paid staff. This is the sort of "whiff" that United Way can't afford to have donors get in the middle of a fund raising Campaign.

The woman who alleges she became the victim of fraud during efforts to stop the dissemination of a Report on United Way, believes $31.2 million is a large enough wad for United Way to take away from their recent Campaign. “They should be able to get by on that", In fact, she believes that setting unrealistically high campaign goals is what got United Way into trouble in her case. In an internal document dated the week police were on her, Dumouchelle revealed that he was under pressure as United Way was $600,000 short of that year’s campaign goal.

Posted by reliable sources at 8:58 PM No comments: