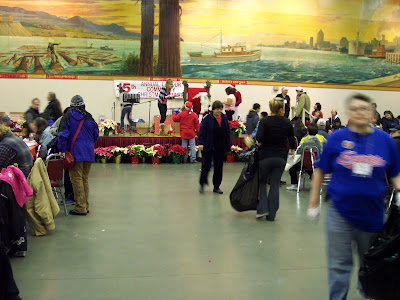 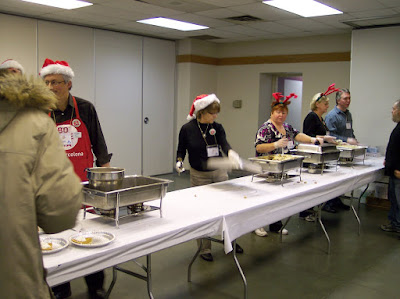 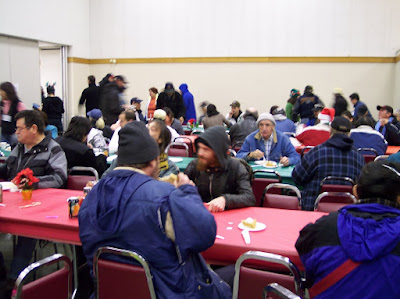 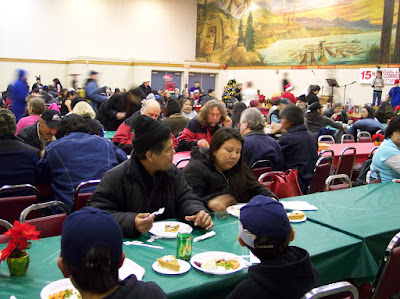 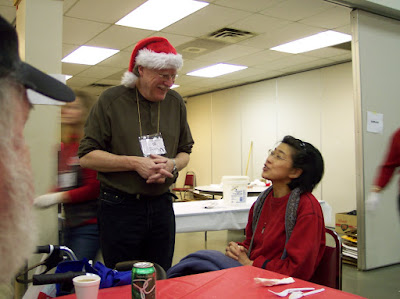 Jim Sinclair, President of the BC Federation of Labour dished up turkey at the event. 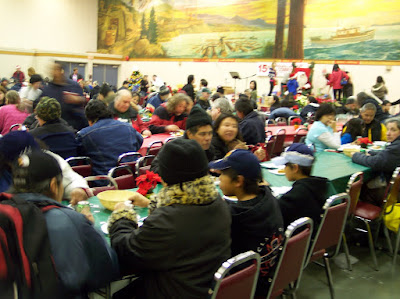 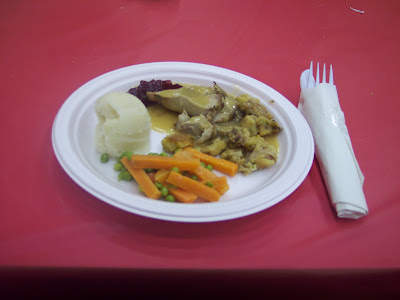 The recession was evident at this year's 15th Annual Labour Community Christmas hosted by the BC Federation of Labour at the Maritime Labour Hall on Vancouver's east side.

The portions were smaller and they discouraged people from going back for seconds, although one man and woman told me they did sneak back. Organizers had planned for more people this year, but they had still underestimated how many would show up. Guests were lined up outside the door before the dinner opened. The wait to get in was about 40 minutes.

A woman said the turkey was cooked just right; it was tender. A man agreed, "The food was well prepared."

Union organizers gave everybody a ticket for a food hamper as a gift, but they ran out of those too, so some people with tickets left empty-handed.

There was no live band this year either.

Santa did show up as usual though. The children all got gifts.

The volunteer servers were all pleasant, as they are every year.

There was a free bus to the event and back, provided by the unions. The bus kept circling from the Downtown Eastside to the Maritime Hall, picking up people at the Dug Out Drop-In Centre and Carnegie Centre. When transporting the last load of passengers of the night, the bus driver went out of his way for a woman who didn't speak much English by giving her a ride to her destination at Kootenay Loop, after he dropped off his Downtown Eastside passengers.
Posted by reliable sources at 9:39 PM 11 comments: Links to this post 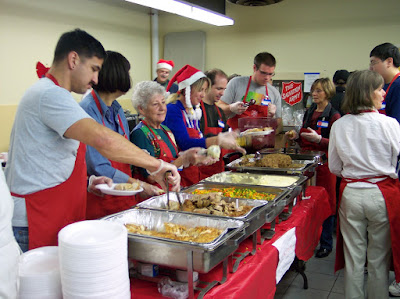 On Christmas Day, the Salvation Army, Harbour Light, on Cordova St. near Main in Vancouver's Downtown Eastside served their annual free Christmas Dinner to anyone who wanted it. The turkey dinner with all the trimmings was reportedly tasty, with pie for dessert. 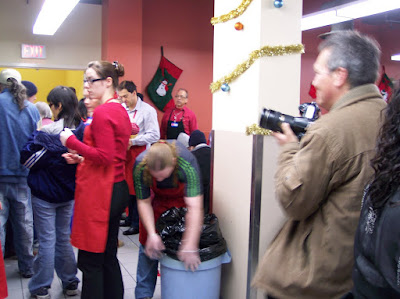 Some people were uncomfortable with the newspaper photographer (above) with a long zoom lens.

The tension between the need of the Sally Ann for publicity and the need for the poor to have privacy is ongoing. A man in a wheelchair told me that at a previous Sally Ann Christmas dinner, he had put his hand over his face and asked a television camera man to stop taking his photo.
Posted by reliable sources at 3:47 PM No comments: Links to this post