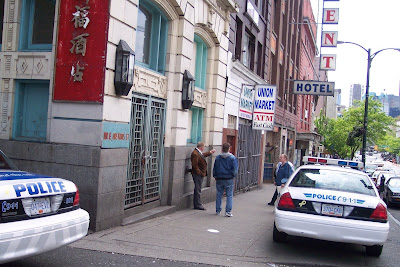 The word on the Downtown Eastside is that a woman jumped from the 7th floor inside the Regent Hotel this afternoon. That's the hotel in the background of the above photo with red vertical lettering.
The woman whose boyfriend had reportedly hanged himself recently, died from her injuries.

One Downtown Eastsider said of people on the sidewalk outside the hotel, "Everybody was looking up."

We haven't confirmed that a woman jumped but two police cars and a ghost car were outside the Regent. Not just constables but a couple of higher ranking police officers were there as well. And an ambulance, we were told, had been at the scene earlier and ambulance attendants had gone inside the hotel.
A constable was questioning a civilian. You can see that if you look closely in the background of this photo, just below the Union Market sign. 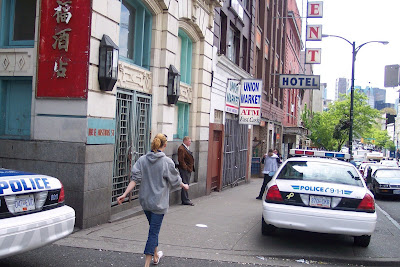 At the Sally Ann soup line on Sunday night, a man was talking about the jumper at the Regent. He said that one under reported story is the number of people jumping from the Washington Hotel. One woman he said jumped but didn't die and is now a parapalegic.
Posted by reliable sources at 3:36 PM 4 comments: Links to this post