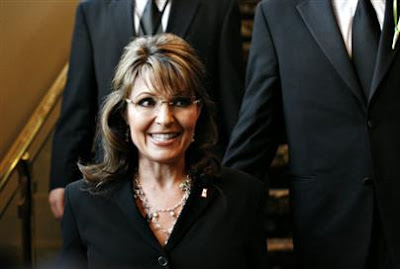 When Sarah Palin spoke last night in Hamilton, Ontario, she said the Palin family -- her husband's family -- have two grandfathers from Canada, one from Saskatchewan and one from Manitoba. But she said she visited Canada often as a child with her own family.
Here's a verbatim transcript of Sarah Palin's comments about Palin ancestors in Canada:
"Relatives from Canada too. We have the foundation of the Palin family, one grandfather was born in Manitoba, this was a farming family there. And then another one born in Saskatchewan and there were some pretty funny stories of our relatives who were bootleggers I guess. This was many, many years ago. Don't blame me. There's never a boring story when it comes to the Palins."
Todd Palin's grandfather, Frederick Palin, was born in southern Manitoba, in the town of Hartley, Brad Coe, a history buff in Hartley, told the Toronto Sun. Coe says Frederick Palin eventually moved to Washington state where his son James Palin -- Todd Palin's father -- was born. Todd Palin was born in Alaska.
On her comment that some of the Palin ancestors were "bootleggers", Coe said that was a common way to make money in Canada during prohibition in the U.S. “A lot of guys fed their families that way. It was money, and you couldn’t get it otherwise. We had a lot of connections with rum-runners. They would make hooch up here, and then run it down to the States."
---------------
I've always thought the vilification of Palin in the media was rooted in classism. Rex Murphy had that take on it too in his recent column in the National Post. He thinks Palin is "smart" and that the vilification of her is rooted in class snobbery.
I recall when Palin was running as VP, I was listening to Ian Punnett hosting Coast to Coast radio, a guy who presents himself as a liberal Episcopalian minister. He opened the show by sneering at Palin for "dropping her g's" during a debate. He didn't talk about positions she took during the debate, just the fact that she was dropping her g's. I saw Punnett as a snob at that moment, and have never really shaken that impression of him.
These phony liberals are a constant on the Downtown Eastside. Like Brenda, who years ago worked at the Livingroom on Powell. Her ex-boyfriend told me that she lived on Bowen Island so that she didn't have to run into anybody from the Downtown Eastside on her off hours.
This morning I was walking up Main St. with a guy who was complaining about Pivot hypocrisy, but I told him I hear far more complaints about Carnegie. He said he knew what I meant, that management at Carnegie expects you to act meek. "Just look at the way they talk to people", he said, as though he knew he didn't have to elaborate.
Leonard, a guy who drops in to Carnegie but is not prone to criticizing staff, was chatting about them a few months ago. "They look down on us, you know", he said in a voice tone that suggested he thought they didn't that know he knew.
Just as it upset povertarians when Downtown Eastsiders started blogging to reach taxpayers with their opinions, I think it bugs elites that Sarah Palin can sit at her kitchen table in Alaska and twitter and reach voters.
Posted by reliable sources at 2:12 PM 4 comments: