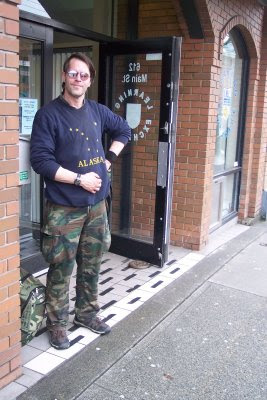 Photo: George C. asked an acquaintance to take this photo of him in front of the UBC Learning Exchange on the Downtown Eastside

Over the past year, George, a homeless man, has been making threatening phone calls and sending threatening letters to President Barack Obama, Sarah Palin, an FBI agent with a fictitious name, the U.S. Consulate in Vancouver, and the Canadian Security and Intelligence Services (CSIS). George claims to be an FBI agent, and often wears a t-shirt with FBI written in gigantic white letters on the front, and handcuffs on the back of his pants.

George was first arrested by Vancouver Police for threats in the summer of 2009. He spent a couple of months in Colony Farms. "What’s Colony Farms?", I asked, when I bumped into him on Main St. in September, just after he had been released. "Colony Farms for the Criminally Insane," he responded, without a hint of embarrassment. He said he had actually been in the institution to observe the staff. "You should have seen it," he said. "It was like One Flew Over the Cuckoo’s Nest." He liked his psychiatrist though, "I had a nice doctor. He was Jewish; he looked like Dustin Hoffman."

"Did they drug you?", I asked, noticing that his eyes were bright and alert, not like those of a person on medication. "They tried that", he said, "but my lawyer wouldn’t let them".
In the months before his first arrest, George had pulled a handwritten letter from the shopping cart — "my carriage", he calls it — in which he pushed his belongings, a letter with a Kinko’s fax receipt stapled to it, that he had sent to President Obama at the White House. He pointed to a scrawled sentence, "You’re dead." Like others he showed the letters to, I told him that he couldn’t threaten people, that he could go to jail for this. He assured me he was immune from prosecution. "I’m George Washington incarnate."

Another homeless man pointed out that George actually signed the letters with his own name.

When George wasn’t sending letters, he was making threatening phone calls from public phones, like one at the University of British Columbia Learning Exchange storefront on the Downtown Eastside. He would phone CSIS and threaten to bomb them. He said CSIS phoned back once and talked to the staff who told him to stop.

Last summer when I ran into George at Burger King where he regularly had coffee, I asked why he had been threatening Sarah Palin. "I thought you liked her", I said, recalling that he had showed me the "Sarah Palin glasses" he had purchased. "I do," he said, but had nonetheless called her office – she was governor at the time — and threatened that she would be shot if she didn’t put all of the prisoners in Alaska in diapers.

After being released from Colony Farms in September, George continued his practice of making threatening phone calls. He had a phone card which allowed him to make long distance phone calls.

Recently, George went beyond phone calls and letters and sent a package to Obama at the White House, according to a friend who was with him when he was arrested for the second time in January 2010. "What was in the package?", I asked. "Oh, I don’t know, soda or something," his friend said, shaking his head. This friend, like other friends and acquaintances of George on the Downtown Eastside, constantly told him not to make threats, that it’s illegal, that he could end up back in the mental hospital. "You could end up like Francis Farmer," one woman acquaintance told him. "Who's Francis Farmer," he asked.

In addition to politicians, George also recently made threatening phone calls to the office of the U.S. prosecutor in the case of the "Prince of Pot", Marc Emery. Emery will serve a 5 yr. prison sentence in the U.S. for operating a mail order business selling marijuana seeds across the border. After being threatened once, the office secretary turned on the voice mail tape and after the beep, George left his message.

The friend who was with George on or about Wednesday, Jan. 27, 2010 when he was arrested for the second time, says he noticed something strange that day. "We came out of the Army & Navy [Department store] and I saw police cars everywhere, ghost cars and marked cars" (although there had been an increased police presence on the Downtown Eastside in the lead up to the Olympics.) George stopped at the TD–Canada Trust bank nearby to ask the manager if he could use the phone. He had previously used the TD Bank phone to make threatening phone calls. The friend watched as the manager refused the request, but George continued to try to persuade him. "They talked for about 15 minutes." At one point, the manager excused himself for a moment. George’s friend then went outside to wait; he noticed several police cars going by. "I saw a ghost car pull up with four cops in it; I thought that was strange, four in one car."

Two of the plain clothed officers got out of the car and walked into the bank. They posed as customers, standing in front of the tellers. One of them was listening to George talking to the manager, and then nudged the other. The manager rapped his fingers on the desk, looking at the officers, nodding his head in George’s direction.

When George left the bank, the two officers followed him. They told his friend to stay back and they arrested George. "They took his handcuffs from his back and handcuffed him," said his friend. They handcuffed him with his own handcuffs?, I asked in disbelief. "Yes." Are you sure they used his own handcuffs?, I asked again. "Yes," the friend insisted, "I was standing there watching; they took them from his back." But the police wouldn’t have the key for that set of handcuffs, I pointed out. "George would have it", his friend retorted.

One of the cops, the lead one, appeared particularly "eager", according to George’s friend, "like he wanted to move up in the ranks." The other one acted more "distracted", the way a person would act when "it’s almost time to get off work." When the friend moved closer to get a badge number, one of the officer’s scolded, "I told you to stand back. Don’t you understand good English?"

George asked his friend to take his shopping cart, telling him where to hide it. One of the police officers said, "Yeah, take it." [The friend pushed the shopping cart up Main St. in the direction of the spot George had instructed him to leave it, but had to detour because he saw a massive swarm of police officers coming in his direction, apparently engaged in an Olympic security training exercise. "I thought they would make me part of their exercise and go through the cart," he said. The shopping cart with George’s belongings later disappeared from the place he had left it.]

George’s friend recalled hearing the officers repeatedly use the term, "terrorist" during the arrest. He heard one of them use it twice; the other one once. "George, a terrorist? Give me a break", his friend had called out to the cops, feigning laughter. But he was worried about his friend, saying later that once you’re considered a terrorist, you don’t get out, and the Americans may want him extradited. "He’ll never get out."

An acquaintance of George saw him at Pender and Main St. in the Chinatown district of the Downtown Eastside on Monday. George told him that he had been arrested for issuing threats, that he had spent 9 days in the North Fraser jail in Coquitlam. George maintained that he had to threaten politicians as they had put microchips in his brain. He was released on $3,000 bail on his own recognizance and is scheduled to appear in court. He had the same legal aid lawyer as he had after the first arrest.

The acquaintance asked George if what he’d heard was true, if the police had cuffed him with his own handcuffs. George wouldn’t answer, the acquaintance said. "I guess he was embarrassed."

George was scheduled to appear in the new "Community Court" in the Downtown Eastside, an alternative court modeled on one in New York state. The Community Court was set up last year to intervene in the lives of people who chronically cycle from the street to jail and back to the street, allowing them to opt for treatment or training rather than doing a jail sentence. If they fail to follow through on an agreed upon plan of treatment or training, they go to jail.

Things must have gone well for George at Community Court as an acquaintance saw him the other day on the Downtown Eastside.
Posted by reliable sources at 11:56 PM 5 comments: