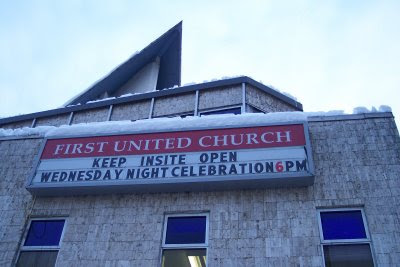 Geez it was cold last night.

First United Church at Hastings & Gore on the Downtown Eastside is now operating as a 21 hour shelter, according to Audrey Laferriere who ran for Council on the homeless issue.

Photo: Audrey Laferriere holds microphone at All Candidates meeting at Carnegie Center on Downtown Eastside in 2008, as she talks about homeless issue.
Laferriere wrote to the DTES Enquirer today,

"There still is a lot of homeless that do not know that the First United Church Mission is now a 21 hour shelter. The shelter providers are not doing a very good job getting the word out. I emailed HEAT (Mayor Gregor Robertson) on December 23rd that each lamp standard in the City should have a poster advising of this needed shelter but never heard anything from him. I was at the First United Shelter yesterday and was told that they had very little problems considering the 200 plus they look after each night."

The shelter accepts pets, carts, couples, singles, children, and teenagers. "Nobody turned away,"announces a poster put up this afternoon on the bulletin board at Carnegie Center.

The shelter opens at 8 p.m. in the evening and stays open until 5 p.m. the next day.

First United Church stopped functioning as a church with regular services and was turned into a mission some time ago. First United's former minister, Ruth Wright -- nicknamed 'Ruthless Wrong' by homeless William Simpson when an employee at the DugOut Drop-In, funded by the United Church, allegedly whacked two people across the head with a two by four -- once told the media that she should qualify for campground funding considering the number of homeless sleeping there.
Posted by reliable sources at 2:29 PM 7 comments: Links to this post