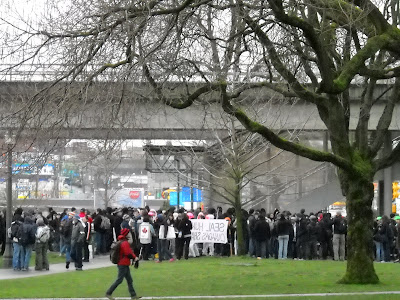 Photo: Demonstrators gather at Thornton Park on Saturday, the morning after the opening of the 2010 Olympics.

Anarchists in Vancouver, Canada have been promising "Riot 2010" for a few years now, and it happened Saturday. A crowd of roughly 200 people, mostly in their 20s, many dressed in full black regalia with their faces covered by cloth masks, assembled this morning at 8:30 at Thornton Park outside the city's main train station in preparation for some post-corn flakes and orange juice state smashing. 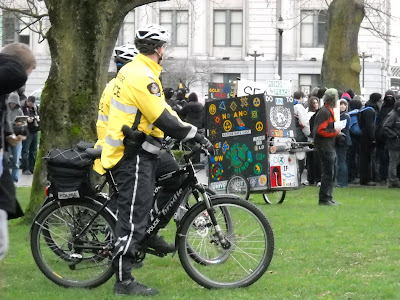 Black flags fluttered in the wind and misty rain, and yellow jacketed cops on bicycles circled nervously as the crowd of demonstrators began a confused march within the park trying to find a way onto Main St., a major artery in the city leading to Hastings St., the main route to the central business district, past which the march was to end, at Denman St. in the city's West End. 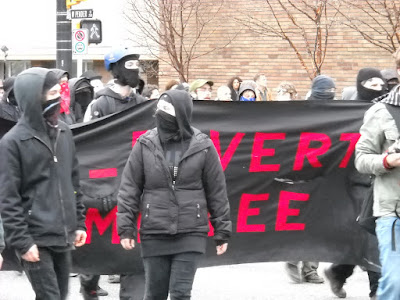 The marchers found their way to Main St. and onto the road itself, leaving behind at least three people in wheel-chairs, one of whom complained, "These young people move so fast." The youths were in a hurry, indeed, at least to make their presence felt on opening day of Vancouver's 2010 Winter Olympics. Blocking traffic with their bodies, the marchers also added orange pylons and trash to the scene as they passed, throwing anything they could find onto the street. The crowd surged toward Hastings St. 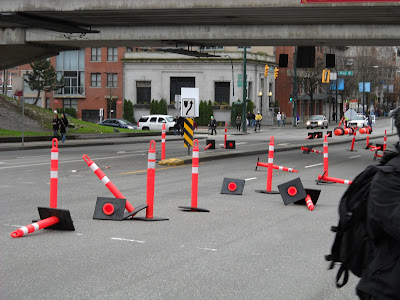 At the intersection of Main and Hastings, the rotten core of the old city business district, the marchers made their way through the worst of the city's skid road. Seeing them come, the area's street people, ranging from old alcoholics to young crack heads and professoinal povertarians drew back from the black-clad protestors, a few street people hurling insults, one particularly gnarled old drunk yelling, "Get a job." The protest leaders, failing to make the turn, found themselves on a minor street and had to back themselves up to continue down Hastings toward the City centre. 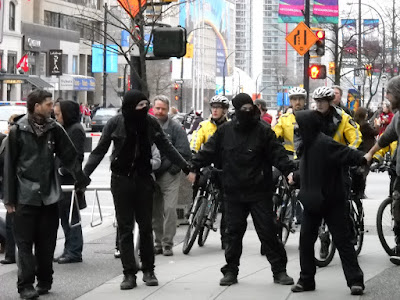 Turning left on Hastings they marched through the guts of skid road, angering those street people who scavenge from dumpsters to find goods enough to sell on the sidewalk by the bottle and can return depot, forcing the street people to gather their goods and huddle over them as the marchers swarmed through and brought a small army of police in tow. Crack-heads too shouted abuse at the anarchists, sputtering and inarticulate cries of anger and outrage at the sight of well-off kids wrecking a morning's commerce. 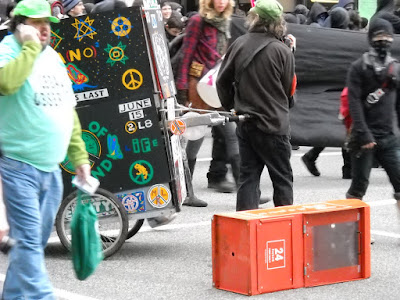 At the War Memorial at Cambie St. the marchers turned left again up three blocks south and moved right into the first section of the central business district, at which point the newspaper boxes on the sidewalks began to land with regularity on the street, pushed by two young men, neither of them being in shape to push it himself, one metal box going under the front wheels of a city bus. Added to the noise of chanting, drumming, shouting young people and the grating noise of metal scraping across the pavement, the nauseating smell of spray paint permeated the air as anarchist logos appeared on building fronts. 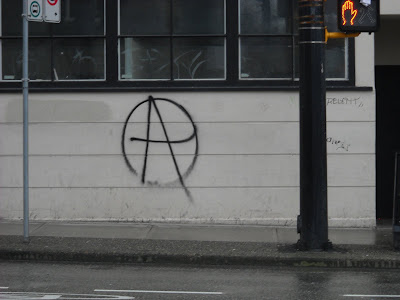 As the demonstrators penetrated further into the central business district there were some arrests for violence, someone reportedly using bear spray on a civilian, some windows being smashed by a man who had earlier found and stolen an aluminum chair. Having lost a few members, the march continued down Georgia St. to Granville, another major intersection in the city and then past Granville into the heart of the business district. Anarchist rioters and police together marched down the sloping street till they came to a halt short of the Denman destination. A confrontation broke out between police and some demonstrators, the police moving along after those who turned south onto Robson St., Vancouver's high-end shopping street. At Robson the march came to an end, the police pinning the demonstrators against the wall of a pizza place, and at the opposite side of the street, police kept order as one irate bystander stripped off his leather jacket and sweatshirt and prepared to pound on a grinning and terrified protestor separated from his fellows, saved by a bicycle cop who jumped the curb and landed between the two men. Seven people were arrested, Vancouver Police Chief Jim Chu announced later. 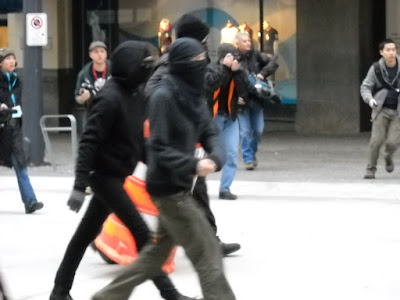 Though some buildings were vandalized, the Tax Department building somehow escaped damage, though nearby there was a scrum of policemen tackling and cuffing a demonstrator in the middle of the street, attracting reporters like... reporters. Others were held back, the police saying that some had been assaulted, one with a hammer.

At that point, police sectioned off three groups of protestors, pinning two groups against walls, a third group moving down an alley to Denman St. as the police, unarmed because, "things could get out of hand and we don't want anyone getting shot," reconfigured their plans.

Regular police in their bright yellow jackets form human barricades to channel the crowd, and behind the regular police, though clearly visible, stood the body-armored and shotgun toting riot squad, sausage-sized rubber bullets in their belts. 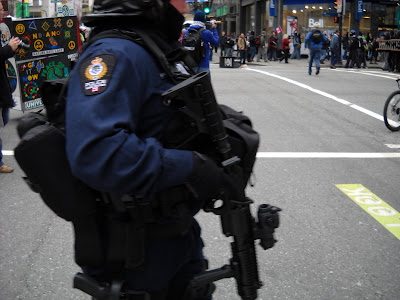 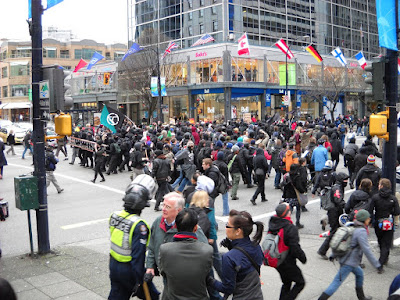 Across the street the anarchists chanted about captialism, and as drums banged and flags waved about saving the seals in Newfoundland, victory was declared; capitalism, if not actually destroyed, then at least given a damn good scare by anarchists on the march. The crowd dispersed. 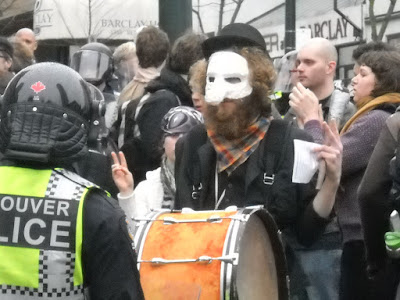 In all, most people, other than those hit by hammers or those maced or whose property was vandalized, most people, and that includes numerous civilians who stood clapping while watching the police acting reasonably under duress, had a good time. Captitalism and world evil still exists, giving the anarchists a reason to continue living so they can continue fighting for ... whatever. 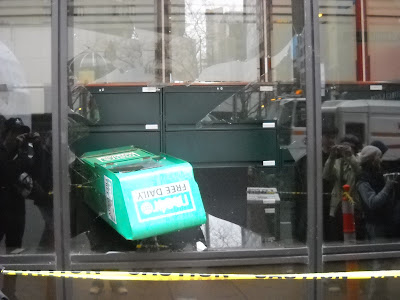 Photo: a newspaper box has been thrown through a window in downtown Vancouver

Posted by reliable sources at 3:15 AM 5 comments: