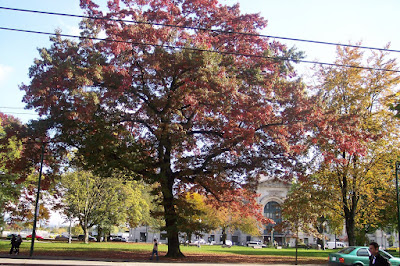 I had found myself looking out the window of McDonald's near Terminal & Main to see if Old Tom’s red car was in it’s usual corner spot in the parking lot. He hadn't dropped in for coffee for awhile.

I didn’t know he had died.

Tuesday morning, I dropped into McDonald's on the way to work and one of the regulars, a guy from New Brunswick, said in a softer than usual voice, “You know Tom died?” I got tears in my eyes as I thought of how there would be no more chats with him. I wanted more.

This morning, the instant I woke up I knew something wasn't quite right. I felt sad. "Oh yeah, Old Tom died."

Tom Moore was about 73 years old. We called him Old Tom to distinguish him from a younger Tom who had also been dropping into McDonald's near Main & Terminal for coffee for years. Before McDonald's, Burger King next door had been the drop-in spot for Tom and his pals to have coffee, until the policy was changed and there were no more free refills.

Tom lived for years in the little house at Strathcona Park where he got free rent in exchange for doing caretaker work, like keeping the washrooms clean. In recent years, he's lived in the caretaker’s house at a park in Mount Pleasant.

From what I've heard, Tom died of a heart attack on Saturday. The guys at the coffee shop know it was the cigarettes that killed him. They knew him when he quit smoking 20 years ago after emphysema set in. But the damage was done.

I had seen Tom around for years but it was only in the last couple of years that I had begun sitting with him and his pals for coffee. Tom fit in on the Downtown Eastside and had a few street people as pals; they would make a few bucks doing odd jobs for him or selling him things they had binned, sometimes even stolen. But Tom stood out on the Downtown Eastside too, because he was smarter than average. He hadn't been to university but he was fun to chat with about politics because he had read a lot and seen a lot in his 73 years. He could usually be counted on to have a perspective -- he wasn't at all hamstrung by political correctness -- that you wouldn’t find in any newspaper.

Tom could be crusty. I told him to back off a couple of times, resulting in loud arguments. But I miss him now that he doesn't park his little red car or big red truck in the corner spot in the parking lot and sit at one of the tables out front. Today, as I sat out front in the sun with a friend who'd been having coffee with Tom for 16 years, I said, “I wish he could come back.”