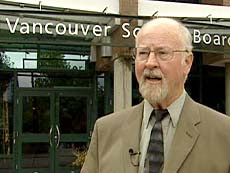 It was a back flip worthy of the Olympics.

Yesterday, Vancouver School Board Chair Ken Denike said no to teachers insisting that a standard recycling program be set up in all schools. It would be too expensive, he told CBC news on Tuesday, Sept. 25. He said recycling in schools was a volunteer effort, although he admitted that it at times deserved a failing grade. "We have attempted in a number of schools to put in a recycling program," Denike said. "But unless you have a diligent teacher there, or someone really pushing it, it doesn't continue."

But here’s what Denike told the CBC the next day: "It's time to do it." On Wednesday, Sept. 26, he said, "I think it's important to do it fairly soon while we've got motivation and interest in schools. Students have also been pushing for the change.” Denike promised a review by the School Board of the possibility of a district-wide recycling program. 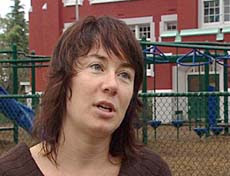 One teacher who put pressure on the School Board to organize a standard blue box program is Michelle Tayler (photo above), a Grade 4 and 5 teacher at Queen Mary Elementary. Tayler told the CBC on Tuesday that while the curriculum emphasizes environmental education, the School Board sets a poor example by discouraging students from actually practicing what they've learned. "Just after lunch you'll see a lot of juice boxes — they're thrown into the garbage cans", Tayler said. "I would have thought by now something would be in place."

Last spring, students from Lord Tennyson Elementary and Lord Byng Secondary made a presentation to Vancouver School Board committees on the topic of recycling and overall sustainability in schools. 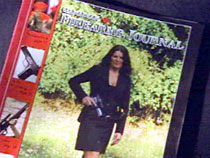 Sharon Gregson, the trustee who oversees Lord Byng Secondary School and who last year appeared in the National Firearms Association Journal sporting a gun on the front cover and a tattoo on an inside page, told the CBC that she is keen on recycling. [In fact, after she recycled her husband, Ian Gregson, he accused her in The Tyee news in April 2005 of taking off on vacation to the Dominican Republic with her new boyfriend and saddling him with their joint-custody kids, sabotaging his ability to campaign as a Green Party candidate.]

Gregson told the CBC that it will take time for a standard recycling program to be voted on by the School Board. First funding will have to be found and then the issue will have to be discussed at appropriate committees.

Gregson says the issue of recycling got backgrounded as trustees have been focused on other issues lately, such as “a lack of adequate funding from Victoria, the problem of last year’s lower than expected enrollment, the problem of facilities that need to be seismically upgraded.” She avoided any mention of the international boycott of Grade 12 diplomas that the VSB was accused in the media last week of concealing from parents. The boycott has some parents looking to next year's election, when even a new recycling program may not be enough to save this School Board from ending up in electoral landfill.
Posted by reliable sources at 9:36 PM No comments: Links to this post