Would the Victoria Police Board Buy a Bicycle from Jamie Graham?

COPP complained in writing to the Victoria Police Board this month about the short-listing of Graham to become Victoria's next police chief. Media rumors point to Graham as the pick. The Board told the media two weeks ago that they had "unanimously" selected a candidate and Victoria reporters were expecting Graham's appointment to be announced at last Tuesday's Police Board meeting. But all they got was an acknowledgement from Mayor Alan Lowe, Chair of the Police Board, that Graham was under consideration for the job.

Instead of Graham being appointed on Tuesday, Police Board member Catherine Holt walked out of the lengthy Board meeting and resigned. "[T]here is public concern about both the process, this board and the candidate", said Holt, a provincial appointee who has sat on the Board for four years. 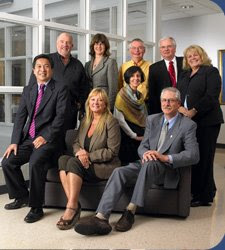 Photo: Vancouver Police Board: Catherine Holt is in the back row, second from the left, wearing a grey suit.

Holt is aware of COPP's complaints. She is aware that COPP has obtained documents supporting multiple complaints to Graham which established that he was comfortable with tactics such as evidence-fabrication, Soviet-style political psychiatry, and illicit accessing of female medical records by his constables. Graham gave thumbs up to such tactics when they were used, for example, to aid United Way in ensuring that a Report on United Way was not disseminated to donors. 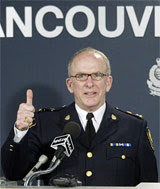 The knock-out punch to Graham in his quest to become Victoria's Police Chief though, may come from Pivot Legal Society on the Downtown Eastside. Pivot was instrumental in having Graham found guilty of "discreditable conduct" by the Police Complaints Commissioner for lack of co-operation with an RCMP investigation into his constables. Graham resigned as Vancouver's chief before that verdict was reached though, so he evaded punishment. Should he become Victoria's chief, Graham will once again be under the Police Act and Pivot has stated publicly that they intend to fight to ensure that punishment catches up with him.

If COPP, Pivot, and other organizations and individuals who oppose Graham's appointment as Chief get their way, just one question will remain. "Would you buy a bike from this man?
Posted by reliable sources at 2:19 PM No comments: Links to this post