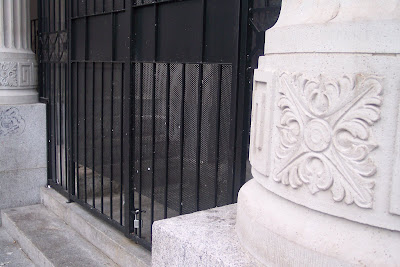 Audrey Laferriere is running for City Council as an Independent in the November 2008 election.

You might remember Laferriere as the woman who earlier this month managed to get 100 signatures of Carnegie members who wanted a recount of the election of the Carnegie Board of Directors. She got help from a few others but she was the organizer behind the effort which produced the signatures in just a few days. Laferriere and other supporters of Rachel Davis were suspicious of the election results. Now there will be a meeting at Carnegie on July 31st in which people can vote on whether to hold a recount. (A minimum of thirty people must show up to make the vote valid.)

Laferriere has a blog, Voice of Gone Ballistic, in which a comment she made about the people who flock to the Downtown Eastside to provide services to the poor caught my eye.

This reminded me of something I saw earlier this year, in the winter, at Pathways Employment Center for the poorest of the poor at Main & Hastings. I had dropped into Pathways one morning looking for Bill Simpson, the homeless man banned from Carnegie Center across the street for carrying a link on his website to the DTES Enquirer. The federal government Security guard at Pathways was pushing the side doors open, attempting to push a man sleeping under a white blanket out of the Main Street entrance. The Indo-Canadian guard was yelling at the man in pigeon English to wake up and get out. The receptionist was watching. The computer tech counting the days to retirement was watching. This drama had been going on for a few minutes when I left. I was amazed that the guard was bothering as I had never seen anyone use that side entrance to Pathways; it always appeared locked to me.

The next day, when I walked by Pathways, I noticed workmen there installing iron bars around the steps (photo by dag above). The homeless would no longer be sleeping there. But these service providers claim to be soooooo sensitive to the poor and homeless. And the Director of Pathways, Carol Madson, is according to a client who has had conversations with her, "an NDP type".
Posted by reliable sources at 12:25 AM

Thank you for including my blog name in your post. You might want to mention that the Pathway building is owned by the City of Vancouver. Our City who says it is wanting to end homelessness. The way they are doing it is called genocide. The street homeless need shelter even if it is just an alcove of the Pathway building. It upsets me to see bars on the buildings in the DTES. Another terrible example is the Gulf and Fisherman Credit Union on Hastings. The manager of the Credit Union is also the President of the Strathcona Business Improvent Association.

I hadn't known that the old bank building at the corner of Main and Hastings that houses Pathways is owned by the City of Vancouver. Thanks for pointing that out.

In future you might want to leave instructions at the end of the post to click on "comments." I have tried a few times to communicate with you but did not know how to do it. Or, alternatively, give an email address.

"Audrey Laferriere is running for City Council as an Independent in the November 2008 election."

I'll sit out back at McD. at Main and Terminal street on Sunday around 2:00 p.m. Join me if you like the idea of Audrey doing something for people in this city as a council member.

Send this note around to friends so we have a good shot at making a difference. It's time for a change.

Yeah, the photo's OK. Thanks for the showcase.