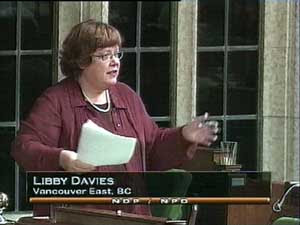 I read in the newspaper that my MP in Vancouver East, Libby Davies, is considered likely to become a cabinet minister should the Tory government fall and the Liberal-NDP coalition take power. I immediately thought of small dead animals.
They dubbed Davies, "MP for the British Columbia riding of Vancouver Moonbat". Kate, a writer at the small dead animals site in Saskatchewan, posted a video of Davies standing up in parliament and reading a petition on behalf of 500 people in her riding who believe that 9-11 was an inside job by the Bush administration.
I doubled over laughing when I saw the video.
I find it frightening that an MP who would not take a stand against the tampering with the free election process at her own organizing base could end up a cabinet minister but, even though I laughed at the video of Libby's 9-11 performance, I don't have a problem with her reading the petition. Commenting at small dead animals, Jeff Patterson wrote, "To be fair to her, does she 'have' to present a petition that is sent to her by her constituents, assuming it is properly formed?" I think she was just doing her job.
I know one of Davies' constituents who would be angry about her reading this petition though. Although I don't follow the 9-11 conspiracy story, I watched part of a video produced by the 9-11 Truth people and commented to this American ex-pat that some of the evidence seemed compelling. He jumped up and yelled at me, "You mean to say MY government, MY government....!!!!" He's lives in Davies' Vancouver East riding and if he sees this video of Libby, I can picture him yelling like Jackie Gleason:
TO THE MOON, LIBBY!!!!
Posted by reliable sources at 2:36 PM

Libby "hoist on her own petard."

Now, our French speakers here will recognize "petard" as a bomb, meaning one blows up oneself. But those who really speak French will also know petard means "fart."

Libby's beans. To the Moon, Libby!

I've been told from reliable sources that Judy Rogers has been let go and that Penny Ballem will be replacing her.

It's not surprising that Libby gets elected time after time to parliament. If she can scrounge up 500 assholes to sign a petition like that, she shouldn't be running for public office, she should be running for the nearest convent, one like the Trappists have, one where she could spend the rest of her life not ever again talking to anyone. She could grow beans and fart all the time.

But no doubt, in a riding with 500 sit-heads who would sign a petition like that, there's always going to be an m.m. of her kind to run on their behalves; and that fool will get elected to represent the mass of assholes just like her. One big public fart.

Curiosity paid me a visit. Google turns up:

And the winner is...