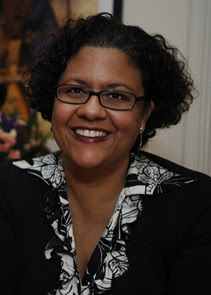 Elizabeth Alexander read a poem at Barack Obama's inauguration today. He had invited her to write it for the occasion. The poem was called, "Praise Song for the Day".

I listened to Alexander read her poem live and the part about love stuck with me:

"What if the mightiest word is love, love beyond marital, filial, national. Love that casts a widening pool of light. Love with no need to preempt grievance."

It sounded to me like she was saying, 'Love, but don't let it interfere with paying the reparations.' "

Alexander wouldn't want grievances preempted as identity politics has been a family business. She is head of African American studies at Yale. Her mother has taught Black women's history for years.

[A few minutes later, civil rights leader Rev. Joseph E. Lowery, now in his eighties, injected a particularly dated version of identity politics into his inaugural benediction. "Lord...we ask you to help us work for that day when black will not be asked to get in back ...when white will embrace what is right."]

When Alexander was recognizing the working class in her poem, including the Black working class, who had "laid the train tracks, raised the bridges, picked the cotton and the lettuce", it reminded me of the speech former social democratic Premier Dave Barrett gave when he was announcing the BC Day holiday. I didn't hear the speech but a friend recently was reciting what he remembered of it. Barrett had apparently said this holiday was in recognition of the people who had built the bridges ...he listed types of labour done by the working class, just as Alexander did.


'Praise Song for the Day' - Transcript

Someone is stitching up a hem, darning a hole in a uniform, patching a tire, repairing the things in need of repair.

Someone is trying to make music somewhere with a pair of wooden spoons on an oil drum with cello, boom box, harmonica, voice.

A woman and her son wait for the bus.

A farmer considers the changing sky; A teacher says, “Take out your pencils. Begin.”

We encounter each other in words, Words spiny or smooth, whispered or declaimed; Words to consider, reconsider.

We cross dirt roads and highways that mark the will of someone and then others who said, “I need to see what’s on the other side; I know there’s something better down the road.”

We need to find a place where we are safe; We walk into that which we cannot yet see.

Say it plain, that many have died for this day. Sing the names of the dead who brought us here, who laid the train tracks, raised the bridges, picked the cotton and the lettuce, built brick by brick the glittering edifices they would then keep clean and work inside of.

Some live by “Love thy neighbor as thy self.”

Others by first do no harm, or take no more than you need.

What if the mightiest word is love, love beyond marital, filial, national. Love that casts a widening pool of light. Love with no need to preempt grievance.

In today’s sharp sparkle, this winter air, anything can be made, any sentence begun.

On the brink, on the brim, on the cusp -- praise song for walking forward in that light.
Posted by reliable sources at 10:49 AM

She's some kind of poetic genius. I looked at her poem on motherhood, and am I ready to head off to the tattoo parlour to get this inked all over my chest:

Is
funky, is
leaky, is
a soggy, bloody crotch, is
sharp jets of breast milk shot straight across the room,
is gaudy, mustard-colored poop...

Colorful. Or, Colourful,That''ll look real inspiring Dag.
And then she launches into a stirring rendition of
"Is You Is, Or Is You Ain't, My Baby"?

Reminds me of Sarah Bernhardt standing with one leg up on a stool, a pack of smokes rolled up in the sleeve of her white tee-shirt, her hair cropped and slicked back, she saying:

Thanks for making me lol.

Obama's got "friends" so he really isn't likely to care about me at all.

January 20, 2009
NYT gets no boost from deal with Mexican billionaire

The deal the New York Times struck with Mexican billionaire Carlos Slim has done nothing for its share price. The stock closed down 50 cents today, closing at $5.91. That's understandable: the company is paying a whopping 14% interest rate, 11% in cash, and 3% in additional bonds.